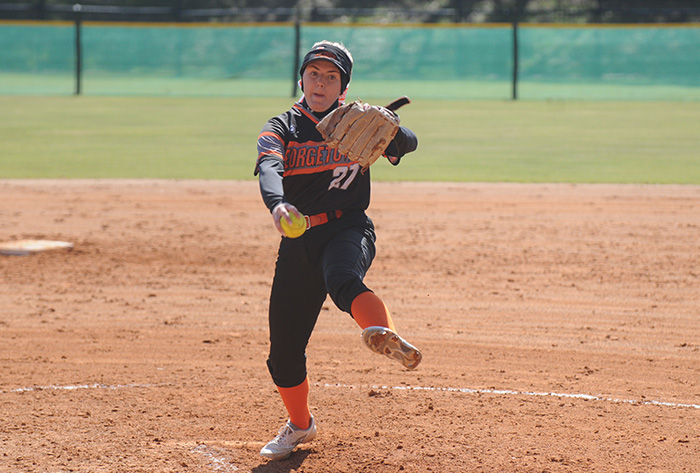 COLUMBUS, Ga. - Four undefeated programs are left after day one of the 2018 NFCA NAIA Leadoff Classic at South Commons Complex. No. 19 Mobile and No. 14 Reinhardt posted 3-0 marks, while No. 13 Ottawa (Kan.) and No. 7 Georgia Gwinnett won both their contests, respectively. No. 14 Lindsey Wilson and No. 12 Campbellsville added two wins to finish 2-1. The first day featured six one-run games and four two-run contests.

With inclement weather in the forecast, the schedule was altered to a two-day format on March 9 and 10. Sunday was canceled and teams added an extra game to their schedule on Friday or Saturday. Day two gets underway with four games at 9:00 a.m.

Mobile’s pitching staff keyed its 3-0 start. The Rams’ staff allowed just two runs on 11 hits with 19 strikeouts and six walks over 21 innings of work. Hope Cain twirled a two-hit shutout, fanning eight and walking one in Mobile’s 3-0 victory over RV Clarke. Karley Sanders (pictured- front) went the distance in a complete-game win over Lindenwood-Belleville (5-1) and earned a 1.2 inning save in a 3-1 triumph against t-8 Lindsey Wilson.

Reinhardt’s Brooke Stoltz tossed a six-hit shutout with four strikeouts and one walk in a 2-0 victory over Calumet. A two-run first-inning home run by Jessica Baker was all the offense the Blue Raiders needed. They also defeated Lindenwood-Belleville, 7-1, and Clarke, 9-7.

In one of the most exciting contests, Ottawa (Kan.) rallied for a 3-2 win against St. Ambrose. Trailing 2-1 in the bottom of the seventh, the Braves executed a one-out double steal to tie the game. In the bottom of the eighth, Katy Blanchard dropped down perfect bunt to squeeze home Ellena Laurie with the winning run. Ottawa defeated USCB, 7-4 in its opener.

Georgia Gwinnett remained undefeated as its offensive carried the Grizzlies (16-0) to wins over Georgetown (9-2) and St. Ambrose (5-4). GGC registered 12 hits in each win with table-setter Niki Cook going 6-for-8 with four runs scored. Against the Bees, a bases loaded grounder to first knocked in the winning run.

Campbellsville’s Neely Quint and Tori Humphrey led the Tigers to two wins. Quint earned a win and a save. She scattered six hits, struck out six and did not walk a batter in a 7-1 win over Lawrence Tech. She stopped a rally with a two-inning save in an 8-7 victory against No. 22 Warner. Campbellsville jumped out to an 8-0 lead only to see the Royals make it a one-run game. Quint allowed a run with two strikeouts in the final two frames. Kayla Bruno homered and drove in four for Warner.

In a trio of upsets, Thomas knocked off t-5 Brenau, 8-0 in five innings, RV Georgetown edged t-8 William Carey, 2-1 and St. Ambrose blanked Campbellsville, 5-0. Thomas scored seven runs in the fourth and Night Hawk hurler Lauren West recorded a complete-game shutout, punching out one and not issuing a walk.

Another stellar pitching performance helped the Tigers top the Crusaders. Georgetown righty Megan Bronkamp (pictured top) went the distance, allowing an unearned run on two hits with 12 strikeouts and one free pass. Her no-hit bid ended with one out in the sixth.

In the final game of the evening, St. Ambrose’s Ella Specht twirled a gem. She recorded a three-hit shutout with nine puchouts and two walks. Megan Ballegeer drove in three runs and finished 1-for-2 with a double.

In addition to the pitching performances, 17 balls left the yard as 14 different players hit home runs on day one.