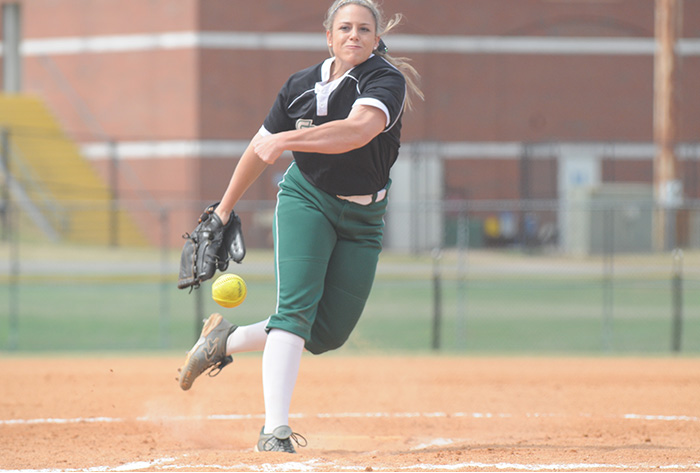 Columbus, Ga. - Georgia Gwinnett was crowned the 2018 NFCA NAIA Leadoff Classic champion on Saturday evening at South Commons Complex. The seventh-ranked Grizzlies were one of five programs to finish the weather-shortened tournament with a 4-1 record and was determined the champion after positing the best run differential.

Joining the GGC with identical records were No. 19 Mobile, No. 12 Campbellsville, USCB and No. 14 Reinhardt.

The Grizzlies (18-1) bounced back from a 7-3 defeat in the morning to No. 22 Warner with run-rule victories over Lawrence Tech, 12-1 and Ottawa (Kan.), 9-0. Highlighted by an inside-the-park two-run home run by Niki Cook, Georgia Gwinnett sent 15 batters to the plate in an 11-run second inning to defeat Lawrence Tech. In their nightcap, the Grizzlies hit pair of home runs and used a seven-run third to pull away from the 13th-ranked Braves. Taylor Hansis (pictured) allowed three hits, struck out eight and walk one in the shutout.

For the tournament, Cook hit .765 (13-for-17) with a double, triple, home run, three RBI and eight runs scored. The Grizzlies recorded 60 hits over five games and scored 38 runs.

Mobile capped off its tournament with a 1-1 mark on Saturday. The Lions suffered a 2-0 loss to Calument before Karley Sanders tossed a three-hit shutout in a 7-0 triumph over Clarke. Sanders struck out 11 and walked two. For the tournament, she finished 2-0 with a save, allowing a run over 15.1 innings of work.

Campbellsville defeated Ottawa, 7-0, and Thomas, 5-1. Against the Braves, Neely Quint went the distance in a one-hit shutout. She fanned four and did not issue a walk. She carried a no-hitter into the seventh before a one-out single spoiled it.

USCB picked up a couple of tight wins, 3-2 over Georgetown and 4-2 over t-No. 8 William Carey. Haley Hawkins and Natassja Hatcher homered in the victories.

Georgetown bounced back as Kodi Farish came within three outs of a no-hitter. She lost the bid after a leadoff single in the seventh and finished with a one-hit shutout, fanning eight and walking two.

In two more shutout performances, Clarke’s Chelsea Fogerty allowed just three hits and struck out one in a 1-0 triumph over No. 23 Rio Grande, while Rio Grande’s Kelly Fuchs shut down Ottawa in a 2-0 win. Fogerty’s shutout was backed up offensively by Kylee Biederman, who led off the contest with a solo home run. In the latter outing, Fuchs only allowed a sixth-inning single, while striking out seven and walking one.

Two of the games that involved late-inning heroic involved Talladega. The Tornadoes came up short after holding a 10-7 lead over Lindenwood-Belleville in the seventh. Emmi Coachman highlighted the three-run top of the seventh with a two-run homer for the Tornadoes. However, a two-run double by Katie Deluka, followed by Deluka scoring on a squeeze sent the game into extras. In the bottom of the eighth, Payton Curtis’ walk-off sac fly won it for the Lynx, 11-10.

Trailing t-5 Brenau, 4-3 in the seventh, Talladega’s Rachel Ross capped off a two-out rally with a three-run game-winning double to grab a 6-4 lead. The Tornadoes would hold off a Tigers’ rally for a 6-5 triumph.