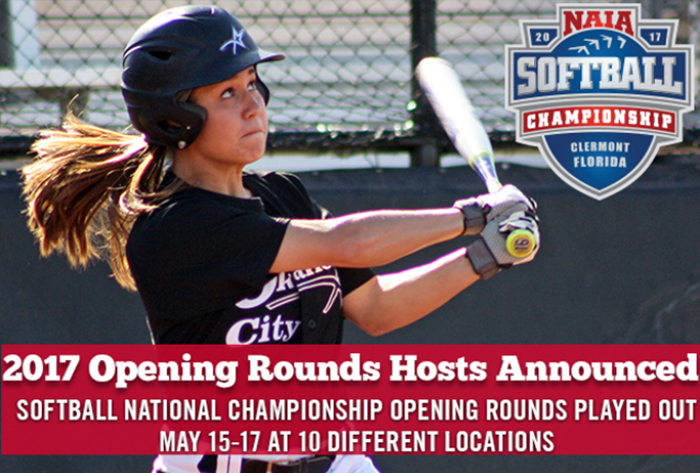 KANSAS CITY, Mo. – The National Association of Intercollegiate Athletics (NAIA) has released the list of 10 host sites for the fifth annual NAIA Softball National Championship Opening Round, announced Wednesday by the national office. The event will be played May 15 –17 and features 10 four-team, double elimination tournaments throughout the country. The 40 qualifiers and pairings for the Opening Rounds will be announced Wednesday, May 10. The opening round playing format can be found here

Six of this year’s teams are returning as hosts for the second-straight year. Within that group, Lindsey Wilson and Oklahoma City will each be hosting for the fifth-straight time since the Opening Round Championship format began in 2013. The other hosts back for a second year in-a-row are Davenport, Georgia Gwinnett, LSU Alexandria and Morningside. Morningside was also the host of the NAIA Softball World Series final site the previous two years.

Last year, six of the 10 Opening Round hosts won their bracket and represented their school at the World Series.

Each Opening Round host site will include a four-team double elimination tournament. The champion of each Opening Round will advance to play in the 37th annual NAIA Softball World Series in Clermont, Fla., that runs May 26 – June 1. The World Series is a ten-team double elimination tournament held at Legends Way Fields with the championship and if-necessary games taking place on Thursday, June 1.

The Opening Round site selection process takes into account: geography, facilities, student-athlete experience, current rating of the team and host qualification. In the event that a host bid is directly tied to an institution, that school is guaranteed at least an at-large berth into the field in order to host. The bid deadline was April 1.