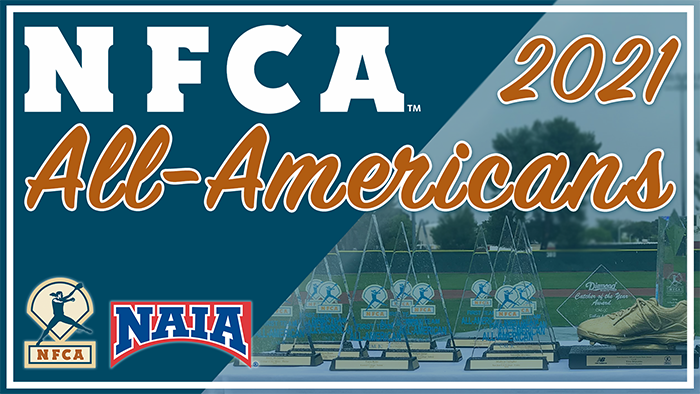 Sandoval earned an at-large selection at pitcher. She finished 32-4, second highest win total in NAIA,  with a 1.60 ERA and 198 strikeouts over 218.1 innings of work. She registered 14 shutouts and held her opposition to a .203 batting average.

Hannah Shimek takes home the honor at second base. Starting all 61 games, she led the NAIA with 69 runs scored, ranked second with 10 triples and fifth with 91 hits. Shimek batted .423, with eight doubles, a .448 on-base percentage and a .567 slugging percentage.

Rounding out the SOU first-teamers is Riley Donovan at the DP or Utility/Non-Pitcher spot. Donovan’s 66 RBI and 22 doubles rank fifth and sixth nationally. The NAIA World Series MVP finished the season hitting .448 (81-for-181) with eight long balls, 57 runs scored, a .516 on-base percentage and a .735 slugging percentage.

Gorman, the Heart of America Player of the Year, led the team with a .411 batting average, 22 home runs and a .874 slugging percentage. She tied the single-season program record for hits (78) and drove in a NAIA-best 82 runs to go along with 14 doubles.

Wagner was named the Association of Independent Institutions 2021 Player of the Year and most outstanding player of the championship tournament. She led the Grizzlies with a .401 batting average, six home runs, 20 doubles, and 36 runs scored. Wagner tied for team-high honors with 34 runs batted in, while recording a .463 on-base percentage and .693 slugging percentage.

Golic, the Chicagoland Collegiate Athletic Conference Pitcher of the Year, finished 24-4 on the season with a 1.38 ERA, 23 complete games and 10 shutouts. Golic tossed four no-hitters and one perfect game. She registered a career-high 241 strikeouts to just 23 walks and limited opponents to a .173 batting average. Golic finished the season ranked top-10 nationally in opponent’s batting average (8th) and wins (9th).

Betker posted a 23-2 mark on the year with a 1.08 ERA and 172 strikeouts to just 24 walks in 155 innings of work. She twirled 12 shutouts, recorded two saves, held her opposition to a .179 average and surrendered just seven home runs in 594 plate appearances.

Dickerson started 24 games in the circle with an 18-2 record and 1.03 ERA, fifth lowest in NAIA this season. She tossed 142.1 innings, allowed just 21 earned runs and racked up 163 strikeouts to just 16 walks for a 10.13 strikeout to walk ratio. Dickerson, the American Midwest Conference Pitcher of the Year, led the Cougars to an undefeated AMC regular season, a fourth straight AMC Tournament title and a NAIA postseason berth.

McPherson College’s Maile Deutsch, the NAIA’s 2021 batting champion, garnered first-team honors at first base. She batted .515 (67-for-130), recording at least one hit in 33 of 42 games with 22 multi-hit contests. Deutch’s .862 slugging percentage ranked fourth, 1.64 hits per game sixth and seventh with 21 doubles. She also registered a .594 on-base percentage, which combined with her slugging numbers, put her OPS at 1.456.

Olivet Nazarene shortstop Alli Davis joins her teammate Southall on the first team. The CCAC Player of the Year led the Tigers and was second in the NAIA with 1.45 RBIs per game and finished third nationally with a .864 slugging percentage and eighth in both home runs (15) and RBI (61). Davis hit .414 with 58 hits, 36 runs scored and a .442 on-base percentage.

Parker Eddy led Faulkner, hitting .448 with 60 hits, 42 runs and an on-base percentage of .534 and a .507 slugging percentage. A threat on the bases, Parker Eddy finished sixth in the country with 40 stolen bases, while only being thrown out twice. The left fielder boasted a perfect fielding percentage, recording 53 putouts and two assists with no miscues.

Rounding out the first team are at-large selections, pitcher Sarah Abramson of Oregon Tech and outfielder Melanie Alexander of Bethel University (Tenn.). Abramson set a single-season program record with 29 wins, posting a 1.64 ERA with 237 strikeouts in 243 innings of work. She allowed just seven long balls in 1,109 plate appearances and held her opponents to a .209 batting average.

Alexander posted the third highest batting average in the NAIA at .504. She led her squad with 65 hits, 13 doubles, 10 home runs, 33 RBI and 43 runs scored. An NFCA All-Region and All-Mid-South Conference first-team selection, Alexander registered a .581 on-base percentage and the nation’s sixth-best slugging percentage at .837.

Southern Oregon’s Stines was named the Diamond Sports/NFCA Catcher of the Year, while Ave Maria University’s Kalie Romig was the recipient of the New Balance / NFCA Golden Shoe Award. Romig, a second-team NFCA All-Region selection, led the nation with a program-record 54 stolen bases and became  The Sun Conference’s all-time stolen base leader. She hit .362 for the season with 51 hits and 47 runs scored.