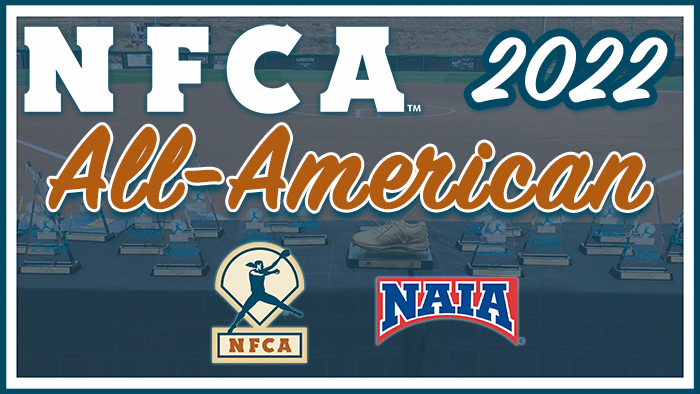 LOUISVILLE, Ky. – Thirty-seven student-athletes from 24 different institutions have been voted to one of two 2022 NFCA NAIA All-America teams, the Association announced on Tuesday afternoon.

Across the two teams there were nine repeat All-Americans, which included four three-time honorees in pitcher Emily Cerny of USAO, outfielder Shelbie Stotts of Marian and a pair of shortstops, Oklahoma City’s Kennedy Jackson (At-Large and Georgia Gwinnett’s Piper Wagner (At-Large). It marked the third first-team nod for Cerny, while Stotts, Jackson and Wagner are back-to-back first teamers.

Along with her second All-America nod, Donovan is the 2022 Diamond Sports/NFCA Catcher of the Year, an honored bestowed on the first-team catcher. She batted .481 with a NAIA-best 89 RBI, 88 base hits, 178 total bases and 51 walks. Donovan recorded the second highest home run total (20) and slugging percentage (.973), and the third best on-base percentage (.973), while ranking fourth in doubles (22) and sixth in batting average and runs scored (70). She sported a .990 fielding percentage and threw out nine runners attempting to steal.

Sanders, who earned her first All-America nod, is the New Balance/NFCA Golden Shoe Award winner. She topped the NAIA with 74 stolen bases, 57 straight to end the season, and was caught just once. Sanders recorded 20 contests with multiple steals, including a season-best four against Calument, Warner and Trinity Baptist, and had four more contests with three. Additionally, she posted a streak of 14 straight games with a steal (29 total).  She batted .383 on the season with a team-best 69 runs.

The NFCA All-America teams are voted on by the Association’s All-America Committees. In the NAIA, the committee is comprised of one elected member head coach from each of the NFCA’s six regions. All student-athletes who were nominated by a member head coach and voted to the first- or second-team All-Region teams were eligible for All-America consideration.