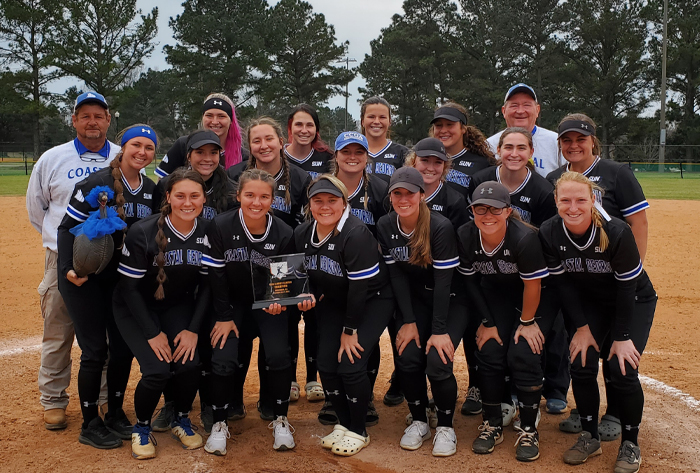 COLUMBUS, Ga. – Following a 10-0 win over Lawrence Tech, Coastal Georgia was crowned champions of the 2022 NFCA NAIA Leadoff Classic on Sunday morning at the South Commons Softball Complex. The Mariners (15-1) were one of three teams to finish 5-0 and earned the title after having the highest run differential. Mobile and Freed-Hardeman also ended the tournament undefeated, with the Rams (12-0) earning runner-up status via run differential.

After scoring single runs in the second and third innings, Coastal Georgia exploded for eight runs in the fourth. Sending 12 batters to the plate, the Mariners recorded seven hits and drew three walks. Taylor Morgan, who walked twice, also scored twice in the inning. Sarah Thinger registered two hits including a two-run double in her second at bat. Reagan Thomas twirled her second straight shutout, the fourth consecutive for Coastal Georgia. She allowed two hits and struck out four. Over five games, the Mariners outscored their opponents, 33-3.

RV Mobile cruised to an 11-2 victory over RV Reinhardt. The Rams (12-0) plated four in the first and two more in the second and didn’t look back. Kaylee Pullin left the yard twice, launching a two-run homers in the second and fourth innings. She finished 3-for-4 with five RBI. Madilyn Sheffield also registered three hits, driving in two with a first-inning double. Emily Loveless homered for the Eagles in the fourth. The Rams posted 32 runs on the weekend and surrendered just five to stay undefeated on the year.

No. 15 Freed-Hardeman concluded play with a 2-0 shutout of No. 11 Georgia Gwinnett to remain perfect on the season. The Lions (11-0) scored single runs in the third and fifth innings on an RBI single by Caitlin Mitchell and RBI fielder’s choice by Sophie Dunavant. Chloe Winters held the Grizzlies in check, scattering six hits, striking out seven and walking two.

The Saints topped No. 10 Campbellsville, 7-1, behind an 11-hit attack. They jumped out with two runs in the first on a sac fly by Jordan Humitz and an RBI single from Emma Houseman. An RBI double by Courtney Hardin pushed it to 3-0 in the fourth. After Campbellsville scored in the sixth on a run-scoring double by Lexi Miller, the Saints gave themselves a six-run cushion with three runs in the top half of seventh. Kayla Fessenden earned the win in relief, allowing a run on two hits with two strikeouts over 2.2 innings of work. Grace Maguire, who entered after consecutive doubles by the Tigers, tossed two innings of shutout relief  to earn the save.

Cumberlands broke a 4-4 ballgame with a five-run sixth and defeated IU Southeast 10-4. The Patriots (11-5) jumped out on top with three runs in the bottom of the first. The Grenadiers (2-7) countered with three in the top of the third. After the teams traded runs in the fourth, Cumberlands posted its five spot, highlighted by a two-run homer off the bat of Hailey Wood. The Patriots outhit the Grenadiers 11-7.

Rio Grande rallied late to edge Ave Maria, 4-3. A two-out two-run double by Zoe Doll in the bottom of the fifth tied the game at 2-2. An inning later, Caitlyn Brisker launched a two-run homer to break the deadlock. Morgan Grimm cut the lead to 4-3 with a two-out RBI single in the top of the seventh, but a groundout to short ended the comeback bid. Grimm also drove in a run with a single in the fifth.

William Carey erased a 2-0 deficit with a four-run third and went on to defeat Truett McConnell, 4-2. Briley Lawson gave the Bears a 1-0 lead with a sac fly to right field in the top of the first and added a second run on a two-out RBI triple to rightfield by Rachel Morgan. In the pivotal third for William Carey, an error that allowed leadoff batter Aleigha Walden proved to be costly for the Bears. Walden came around to score on a run-scoring double by Brooke Tanner. With the bases loaded and two outs, Carley Kiddler tripled to left center clearing the bases and giving the Crusaders the lead for good. Megan Dudenhefer earned the win in four innings of work, allowing two runs on four hits with three strikeouts and two walks. Haley Nations earned the save with three innings of shutout relief.