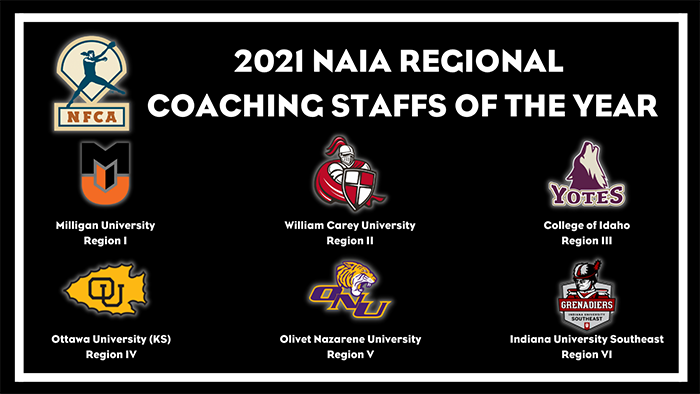 LOUISVILLE, Ky. – Six programs were selected by their peers as 2021 NFCA NAIA Regional Coaching Staffs of the Year, the Association announced on Tuesday afternoon.

Milligan, College of Idaho, Ottawa and Olivet Nazarene each earned a trip to the 2021 NAIA Softball World Series, while William Carey and IU Southeast each were NAIA Softball National Championship Opening Round participants.

NFCA Regional Coaching Staffs of the Year are voted by member NAIA head coaches in each respective region.

Guided the Buffs to their first-ever NAIA Softball World Series as the No. 8 overall seed … Qualified for the NAIA Softball Opening Round for the third time in five seasons … Swept the Lawrenceville bracket, which included a win over host and No. 8 Georgia Gwinnett … Won first AAC regular-season title since 2012 … Holly was named AAC Coach of the Year.

SSAC regular-season and tournament champions … Earned automatic bid and hosted NAIA Softball Opening Round … Made their seventh opening round appearance… Ranked No. 10 in the final NAIA Coaches Poll of the regular season.

Earned their first trip to the NAIA Softball World Series and are the No. 4 overall seed … Won the Fayette (Mo.) Bracket as the No. 2 seed … After dropping game one of the opening round, the Yotes won four elimination games in a span of 24 hours, including a victory over host and top seed Central Methodist… Captured a bid into the NAIA Softball National Championship Opening Round for the sixth time in program history … Ranked No. 15 in the final NAIA Coaches Poll of the regular season.

Made fourth appearance in NAIA Softball World Series as the No. 5 overall seed … Came out of the Oklahoma City Opening Round as the No. 3 seed, sweeping through host and No. 2 Oklahoma City, Dickinson State (N.D.) and No. 25 Midland (Neb.) … School-record 45 wins … Captured KCAC regular-season and tournament championships … Kahnt was named KCAC Coach of the Year … Ranked No. 20 in the final NAIA Coaches Poll of the regular season.

No. 3 overall seed at the NAIA Softball World Series in its first trip since 2014 when Gardner was a senior on the team … Swept through Bowling Green (Ky.) Opening Round with two wins over host and No. 16 Campbellsville as well as another against top seed and No. 6 Indiana Wesleyan … Regular season CCAC champions for second straight season … Finished undefeated at home with a 16-0 mark … Ranked No. 12 in the final NAIA Coaches Poll of the regular season.

Finished runners-up at the Columbia (Mo.) Softball Opening Round … Went 3-2 in the opening round … All three wins were shutouts, including triumphs over host and No. 7 Columbia College and No. 9 Marian University … School-record 48 wins … Captured RSC West Division title … Witten was tabbed RSC Coach of the Year.