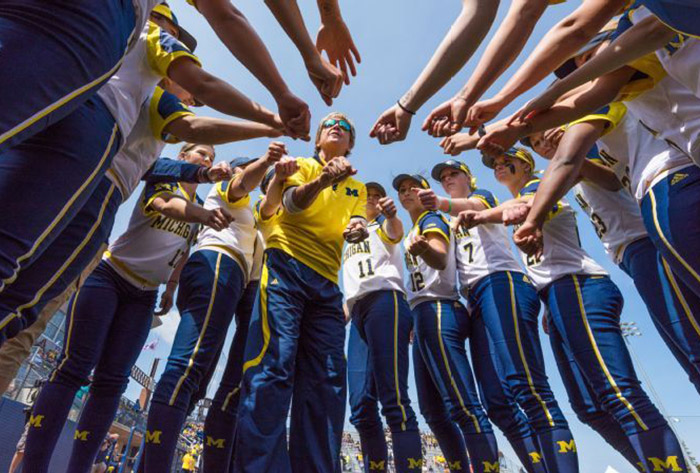 A few hours before her team played its most important game of the 2012 season, University of Michigan softball coach Carol Hutchins stepped into the stifling sauna that Tuscaloosa, Alabama, can feel like by Memorial Day and went for a jog. Her route took her past the University of Alabama's softball stadium, one of college softball's crown jewels but also the home of a program that played its first-ever game in a city park about a month before Hutchins won her 500th game.

In town to broadcast the NCAA tournament super regional between Michigan and Alabama, ESPN's Jessica Mendoza, then also an active player and one of the best hitters in the sport, was taking batting practice in an otherwise nearly empty stadium.

Soon enough, a solitary figure appeared in the outfield. Hutchins not only had found her way inside the gates but apparently borrowed a glove from someone. As the Alabama sun beat down, she settled under a couple of stray fly balls that didn't disappear over the fence.

I count myself fortunate to have seen a few grand softball moments in person over the years, but that small scene in Tuscaloosa remains perhaps my favorite. It is at least partly so, I think, because it is difficult to imagine it starring anyone other than Hutchins. It wouldn't work with any other coach. It wouldn't work with Geno Auriemma wandering in to rebound for Candace Parker. It made sense with Hutchins.

She is softball. She is its story. You can teach its past, present and future by tracing her path.

So, of course, she stopped and shagged flies. She and the sport have that kind of relationship.

When Michigan beat Indiana on April 2, 2016, Hutchins passed former Fresno State coach Margie Wright for the most wins in NCAA history. As opening day approaches for Team 40 (one of the traditions she initiated years ago is that the Wolverines refer to each team in chronological order), her total stands at 1,484 wins. All but a handful came in 32 seasons at Michigan.

Nor is she slowing at age 59. Michigan spent the entire 2016 season ranked in the top five, including a stint at No. 1. It reached the Women's College World Series for the second consecutive season and the 12th time under Hutchins. Michigan won 52 games, ranked second in the nation in scoring and earned its ninth consecutive Big Ten title.

She played shortstop at Michigan State in the 1970s when the NCAA still wanted nothing to do with women's sports. In those days of the Association for Intercollegiate Athletics for Women, the Red Cedar River ran behind first base at the softball field in East Lansing -- and it was only a field, not a stadium. The river was often the final resting place for errant Hutchins throws. Three decades later, on national television and in front of thousands, Michigan became the first from east of the Mississippi River to win an NCAA championship.

It is easy to make such juxtapositions. She was hired at Michigan as a part-time softball coach and part-time administrative assistant. She now has an office in the softball building that sits next to the softball stadium. There were barely 100 Division I programs when she took over in Ann Arbor three years into the NCAA era. There are now just shy of 300. Once an outpost, Michigan helped the game grow.

Yet it is on the smallest scale that she matters most. Hutchins can be acerbic. She can glower with the best of them. Even now, I ask a question and wait to see if it passes muster. And the media have it easy compared to the player called in front of her for some transgression. It isn't a facade. She suffers fools not a smidgen. But so little of it has to do with the wins and losses. So much of it has to do with respect. Respect for the game. Respect for teammates. Respect for people.

Enter the Michigan dugout and you find not just players, but people like Emily Hepker, who has waged a long-running fight with cancer. Generally fearless, even Hepker was intimidated to introduce herself to Hutchins on first meeting. Yet without any pity, Hutchins made her part of the team. Not in some ceremonial or honorary way, but in the meaningful sense of being part of the collection of people.

It is the most important juxtapositions that she is beloved by those who play for her and a great many of those she beats. Players don't walk on eggshells around her; they make fake pizzas.

When Hutchins was just starting out in coaching, her late mother used to ask when she was going to get a real job. On that morning in Alabama, the answer seemed obvious. Never.

And generations of women have gone about their lives the better because of it.