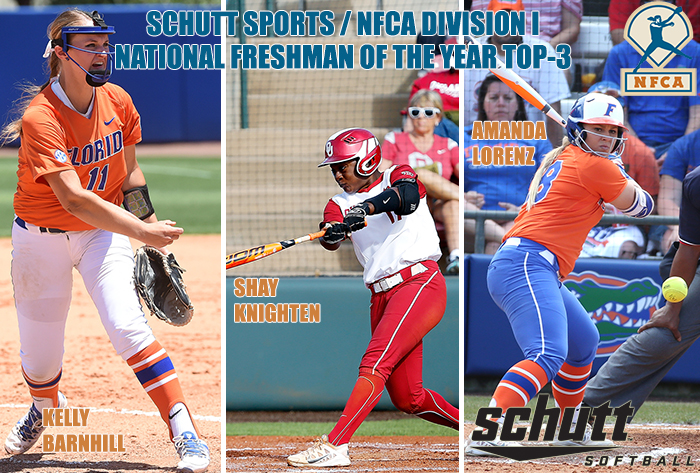 LOUISVILLE, Ky. – Florida teammates Kelly Barnhill and Amanda Lorenz, along with Oklahoma’s Shay Knighten were selected the three finalists for the 2016 Schutt Sports / NFCA Division I National Freshman of the Year award, announced the Association on Wednesday morning.

On Tuesday, May 31, the award will be presented to the winner at the 2016 NCAA Women’s College World Series banquet at the Petroleum Club in downtown Oklahoma City.

With the selections of Barnhill and Lorenz, the Southeastern Conference has been represented in the top-three by five players in the first three years of the award. It marks the first two from the two-time defending WCWS champions. Barnhill or Lorenz would join inaugural co-winners Tennessee’s Annie Aldrete and Auburn’s Kasey Cooper as recipients from the SEC. Knighten is the second straight finalist from Norman and will be looking to join teammate Paige Parker as the second consecutive Sooner to win the award.

Hailing from Marietta, Ga., Barnhill was named to the NFCA’s Southeast Region third team and to the SEC’s all-freshman squad. She holds a 15-1 record with a 1.36 ERA with 167 strikeouts in 108.1 innings pitch. The right-handed hurler has held her opposition to an SEC-best .135 batting average, while her ERA and strikeouts rank her sixth and ninth overall in the league. Barnhill is already in the UF record books, recording a single-game program-record 18 strikeouts against Winthrop on March 16. She also twirled her first collegiate no-hitter in the regular season finale versus Arkansas.

A first-team NFCA All-Southeast region selection, Lorenz ranks among the SEC leaders in hitting (.406-9th), hits (71-7th), runs scored (56-t11th), doubles (14-t9th), walks (47-4th) and on-base percentage (.531-6th). The left-handed power hitting outfielder has started all 61 games for the No. 1 Gators during her rookie campaign. Lorenz, a Moorpark, Calif. native, was named the SEC Freshman of the Year and earned first-team all-conference honors. She is climbing up the UF rookie record books, ranking first in walks, tied for second in doubles, fourth in runs and fifth in hits.

The Big 12 Freshman of the Year, Knighten has been Oklahoma’s biggest power threat this year, leading the team with 11 long balls and 52 RBI, ranking fourth and tied for fourth in the Big 12, respectively. The Buena Park, Calif. native has posted a .395 batting average with a .678 slugging percentage and .450 on-base percentage. A versatile player, Knighten, who was selected to the NFCA’s All-Central Region first team, started the last 27 games at first base, but also made starts at second base, designated player, right and left field.

With the Association always searching for innovative ways to promote the sport of softball, the award was created in 2014 from an idea to honor outstanding athletic achievement among freshmen softball student-athletes throughout Division I.