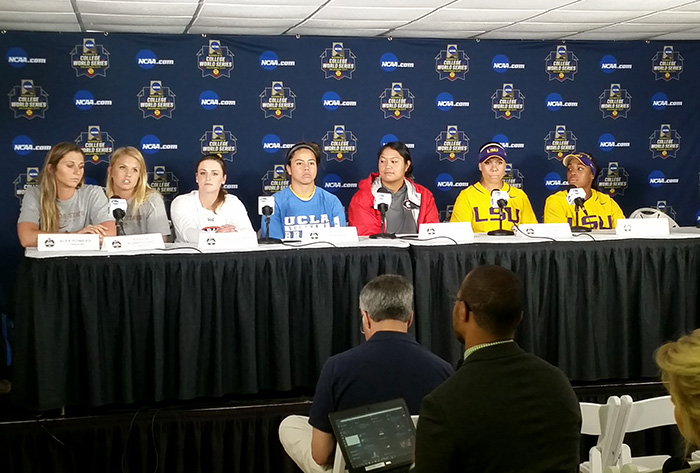 OKLAHOMA CITY – Fifty-eight student-athletes from 31 different institutions were selected to one of three 2016 NFCA Division I All-American teams, the Association announced on Wednesday afternoon.

The five conferences - Atlantic Coast Conference, Big Ten, Big 12, Pac-12 and Southeastern Conference - that are represented at this year’s Women’s College World Series have 22 selections, including six student-athletes on the first team. In all, the SEC led the way with 18, while the Pac-12 racked up 10 nods and the Big Ten Conference came in with eight selections. The Big 12 (5), ACC (5), Sun Belt (3) and Colonial Athletic Association (2) also received multiple recognitions.

Headlining the NFCA All-American First Team is a pair of four-time All-Americans - 2016 USA Softball Collegiate Player of the Year, Sierra Romero of Michigan and Senior Class Award winner, Haylie McCleney of Alabama. Both have garnered first-team honors the three seasons after being selected to the second-team as freshmen in 2013.

The top second baseman in Division I, Romero is enjoying a stellar senior campaign after becoming the first Wolverine to have USA Softball Player of the Year honors bestowed on her. The Big Ten Player of the Year is batting a team-best .465 with 72 hits, 11 doubles, 19 home runs, 78 RBI and 74 runs scored, while slugging an eye-popping .916 and owning a .585 on-base percentage. Romero, Michigan’s first four-time All-American, is already the NCAA record holder in career runs (300) and grand slams (11) and became the first collegiate player to record 300 hits, 300 RBI and 300 runs over a career.

McCleney, a top-10 finalist for USA Softball Player of the Year, is one of the most proficient leadoff batters in the country. The senior centerfielder is the sixth four-time All-American in program history after another tremendous season on the field and in the classroom. McCleney is hitting .441 and has a great eye at the plate, drawing 55 walks and posting a mind-blowing .600 on-base percentage. Along with the Senior Class Award, McCleney was is a two-time CoSIDA Softball Academic All-American of the Year, maintaining a 4.0 GPA in exercise science.

Florida junior Delanie Gourley, James Madison sophomore Megan Good and Oklahoma sophomore Paige Parker are recognized as the three first-team pitchers. Gourley, a USA Softball Player of the Year top-10 finalist was lights out in the circle for the Gators. She posted a 19-4 record with a team-best 224 strikeouts in 157.2 innings of work. Earning her first All-American recognition, the southpaw ranks third in Division I with a 0.80 ERA and owns a miniscule .141 batting average against.

A hard throwing righty, Good played a big role in the Dukes’ highest national ranking (seventh) and historic run to Super Regionals. She is second in the NCAA with 32 wins and fourth with a 0.91 ERA. She garnered CAA Player of the Year honors for the second consecutive season and finished 2016 at 32-3 with 10 shutouts and 222 strikeouts to just 43 walks in 215.2 innings. Now a two-time All-American, Good held her opponents to a .151 batting average and was named a top-10 finalist for USA Softball National Player of the Year.

The nation’s leader with 33 victories, Parker is earning her second straight All-American honor. The Big 12 Pitcher of the Year is 33-3 entering the Women’s College World Series. Parker is sporting a 1.55 ERA and 244 strikeouts, while holding opponents to a .185 batting average and shutting them out 13 times – the second highest total in the NCAA.

Behind the dish as the first-team catcher for the second straight season is Louisiana-Lafayette senior Lexie Elkins. One of the most feared power hitters in the NCAA, Elkins put up monstrous offensive numbers despite a mid-season injury to her thumb. The three-time All-American and two-time Sun Belt Player of the Year hit .509 with 10 doubles, 19 home runs, 49 RBI and an astronomical 1.737 OPS in just 37 games. Elkins, the first overall pick in the NPF draft, also flashed her glove behind the plate. With a .996 fielding percentage, she committed just one error in 238 chances, while gunning out five of the nine runners attempting to swipe a base.

Michigan’s Tera Blanco mans first base for the All-American first team. The sophomore is batting .406 with 12 doubles, 12 home runs, 64 RBI and a .762 slugging percentage. The first-time All-American and first-team Big Ten selection is a smooth defensive player on the right side of the infield. Blanco did not commit an error in 295 chances to lead one of the top defensive teams in the country.

Back for the second straight year is Auburn third baseman and SEC Player of the Year, Kasey Cooper. The junior’s bat and defensive prowess at the hot corner earned her ESPNW Player of the Year honors as well as a top-three finalist spot for USA Softball Player of the Year. She is hitting .425 with 71 hits, 17 doubles, 10 home runs, 64 runs scored and an .880 slugging percentage. With a great eye at the plate, she has drawn 67 free passes, attributing to her .589 on-base percentage. In the field, she has posted a .962 fielding percentage with just seven miscues on the year. In addition, Cooper, who owns a 4.0 in mechanical engineering, was named the NCAA’s Elite 90 academic award winner.

The ACC’s most prolific power hitter, North Carolina shortstop Kristen Brown rounds out the infield selections. During a stellar senior campaign, she launched 19 of her league-record 66 career home runs in 2016. Along with her penchant for leaving the yard, Brown, a first-team All-ACC honoree, hit at a team-best .388 clip with 58 RBI, 44 runs scored, 38 walks and a .521 on-base percentage.

Joining McCleney in an all senior outfield are first-time All-Americans, Missouri’s Emily Crane and Oregon’s Koral Costa. Batting .404, Crane collected 69 hits and led the Tigers at the plate with 15 doubles, 17 home runs, 61 RBI, 54 runs scored and an .801 slugging percentage. She left a mark on the Missouri record books, which included tying for the single-season record for runs scored and registering top-five numbers in several other offensive categories.

Costa, a first-team All-Pac 12 selection, registered a team-best .412 batting average with 63 hits, 13 doubles, 10 long balls, 46 RBI and 52 runs scored. She posted a .500 on-base percentage and slugged .719 to help her program claim the Pac-12 regular season title and a berth in to the NCAA Super Regionals.

Earning the first-team nod at Utility/Pitcher is James Madison senior Jailyn Ford. The three-time All-American’s success at the plate and in the circle played a big role in the Dukes’ historic 50-win campaign, which included the program’s first NCAA Super Regional victory. Selected the CAA Player of the Year, Ford hit .324 with 10 doubles, 11 round trippers, 33 RBI and 40 runs scored. Ford posted an 18-3 mark in the circle with an 1.03 ERA and 188 strikeouts in 150 innings, while holding her opposition to a .163 batting average.

At DP or Utility/Non-Pitcher is Washington’s Kimberlee Souza. Enjoying a career season at the plate for the Huskies, Souza hit .346 with 53 hits, 10 doubles, 13 home runs, 59 RBI and 34 runs scored. Garnering NFCA All-Region and Pac-12 first-team honors, she recorded 18 multiple-RBI games, tied for most on the squad, and 14 multiple-hit contests.

The five at-large selections on the first team begin with Florida pitching ace Aleshia Ocasio. A finalist for USA Softball Player of the Year, the sophomore righty put together a 22-2 record with the NCAA’s second-best ERA of 0.77. Ocasio, a first-team All-SEC selection, struck out 147, walked just 23 and held opponents to a .183 batting average in 146.1 innings of work.

The second at-large selection is Michigan senior outfielder Sierra Lawrence. Hitting .440, Lawrence garnered first-team All-Big Ten honors after tallying a team-high 73 hits and 76 runs to go along with 11 long balls and 45 RBI. She also was a perfect 20-for-20 swiping bases and drew 36 walks for a .553 on-base percentage.

Also on the at-large team is Utility/Pitcher Sara Groenewegen of Minnesota. Currently tied as the NCAA’s strikeout queen, the junior righty fanned 336 batters and averaged 10 strikeouts per seven innings, which is good for sixth nationally. Owning the NCAA’s third-best win total, Groenewegen, a Big Ten first team selection, finished 31-7 with a 2.03 ERA, seven shutouts and a .197 batting average against. At the plate, she hit .296 with 11 home runs and 41 RBI.

Nabbing another spot on the at-large squad is Kentucky’s most historic pitcher, senior Kelsey Nunley has left her mark all over the UK record books. Garnering the program’s first SEC Pitcher of the Year recognition, Nunley posted a 21-6 record with seven shutouts and 203 strikeouts in 181.1 innings allowed her opponents to hit just .178.

Finalizing our first-team selections is at-large third baseman MJ Knighten of Nebraska. Named to the Big Ten first team, Knighten hit .376 with 21 home runs - fourth most in the NCAA, a team-best 60 RBI, 61 runs and a .794 slugging percentage. The junior and first-time All-American became the first Husker to total 60 hits, 60 runs and 60 RBI in a single season, while reaching the 50/50/50 mark for the second straight season, also a first in program history.

For videos about each of the NFCA Division I All-America teams, please click the following links: