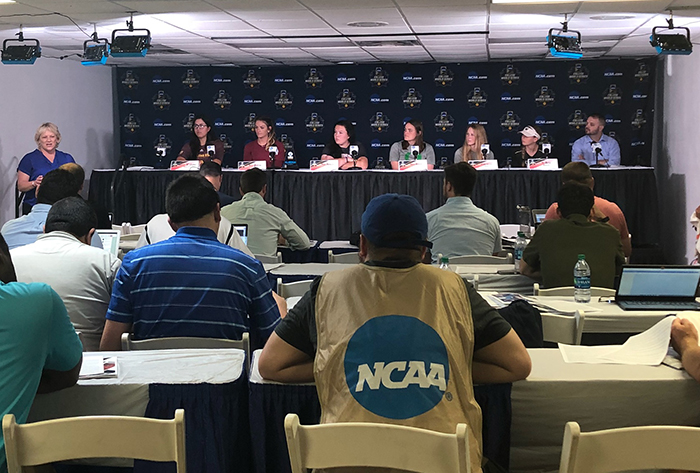 OKLAHOMA CITY – Fifty-four student-athletes from 35 different institutions were selected to one of three 2018 NFCA Division I All-America teams, the Association announced on Wednesday afternoon during the Association’s annual press conference at the Women’s College World Series. Additionally, the NFCA announced its annual Diamond Sports/NFCA Catcher of the Year and New Balance/NFCA Golden Shoe award winners.

The Pac-12 Conference and Southeastern Conference led the way with 12 honorees apiece, while the Big 12 Conference had seven representatives. The Big Ten (5), Atlantic Coast Conference (4), Colonial Athletic Association (3) and the Sun Belt Conference (2) had multiple All-Americans.

All eight programs participating in the 2018 WCWS have a total of 23 All-Americans, 11 on the first team. Oregon leads the way with four selections, while Florida State University, UCLA, the University of Florida, University of Georgia, University of Oklahoma, and University of Washington are represented by three student-athletes. Arizona State has one honoree. The Sooners top the charts with three first-teamers. The Ducks, Gators and Bruins have two apiece.

The first team is highlighted by the 34th four-time NFCA All-American in pitcher Paige Parker of Oklahoma, Schutt Sports/NFCA Freshman of the Year Jocelyn Alo and USA Softball Collegiate Player of the Year Rachel Garcia of UCLA.

Parker, an at-large first-team selection, was named the Big 12 Pitcher of the Year and finalist for USA Softball Collegiate Player of the Year. She is 29-2 with a microscopic 0.86 ERA, both second in the NCAA. She has fanned 188 batters and walked just 33 in 163.2 innings of work. Parker, making her third straight WCWS appearance, has posted six shutouts, while holding her opponents to a .158 batting average.

Alo, a first-team honoree at the designated player or utility/non-pitcher position, is having a monstrous rookie season at the plate. The utility player leads the NCAA with 28 home runs and in long balls per game at 0.48. Additionally, Alo ranks third nationally in slugging (.970), second in total bases (159) and fourth in RBI (71) and RBI per game (1.20). The Big 12 Freshman of the Year leads the Sooners with a .415 batting average and .545 on-base percentage.

Garcia garners her second straight NFCA All-America accolade and is on the first team at the utility-pitcher spot. The sophomore leads the Bruins’ pitching staff with a 21-2 record and 218 strikeouts in 142.2 innings of work, while adding a .355 batting average, nine home runs and 44 RBI. Garcia is second in the NCAA, allowing just three hits per seven innings, is fifth with 10.3 strikeouts per seven innings and seventh with a 1.02 ERA.

The other three unanimous selections are the three first-team outfielders. Lorenz, a junior, is now a three-time NFCA All-American. Named SEC Player of the Year, Lorenz was a finalist for USA Softball Collegiate Player of the Year. She is batting .433 with 17 doubles, four triples, eight home runs, 49 RBI and 72 runs scored, which is the third-best total in Division I. A tough out her entire career, the SEC Tournament MVP has reached base safely in all 61 games this season, which includes an NCAA-best 66 walks contributing to her .571 on-base percentage (5th in Division I).

Jordan, a top-10 finalist for the Schutt Sports/NFCA Freshman of the Year and USA Softball Collegiate Player of the Year, tops the Bruin squad with a .444 average, 11 homers, 63 RBI, 14 doubles, 123 stolen bases, a .759 slugging percentage and .497 on-base percentage. The first-team All-Pac 12 selection is ranked nationally in the top 40 in eight offensive categories, including tied for seventh in RBI, tied for 10th in hits and 19th in batting average.

Scroggins, a senior, is taking home her first NFCA All-America honor. She led the Bears with a .461 batting average, 88 hits, 49 runs scored, a .490 on-base percentage and 18 stolen bases. Scroggins ranks fourth nationally in hits and fifth in batting average. She is just the third Baylor Bear to finish with a .400 or better average in program history.

The three first-team pitchers are Oregon’s Megan Kleist, Arizona State’s Giselle Juarez and Florida’s Kelly Barnhill. Kleist collects her second NFCA All-America honor and was a top-10 finalist for USA Softball Collegiate Player of the Year. She is 21-6 with a 1.14 ERA and 214 strikeouts to just 17 walks in 172 innings. Kleist tossed back-to-back no-hitters this season and has held her opposition to a .171 batting average. The Pac-12 Pitcher of the Year owns an NCAA-best 12.59 strikeout-to-walk ratio and is second nationally with a miniscule .69 walks per seven innings.

Juarez, a sophomore, ranks in the NCAA’s top 20 in seven categories, including third in shutouts, fifth in ERA and eighth in strikeouts. She was a four-time Pac-12 Pitcher of the Week and named to the league’s first team. In helping the Sun Devils reach their first WCWS since 2013, Juarez put together a 26-4 record with a 0.91 ERA, 13 shutouts and 297 strikeouts to just 38 free passes, while holding her opponents to a .143 batting average.

Barnhill collects her second straight first-team nod. A finalist for USA Softball Collegiate Player of the Year, Barnhill is 29-1 with a 1.06 ERA, 11 shutouts and 310 strikeouts. The SEC Pitcher of the Year has held her opponents to a stellar .117 batting average and tossed five no-hitters, including her first perfect game this season. She has struck out the side 33 times, produced 16 contests with 10 or more punchouts and enjoyed a 37-inning scoreless streak in 2018.

Svekis, the 2018 Diamond Sports/NFCA Catcher of the Year, earns her first NFCA All-America plaudit in her senior season. The All-Pac-12 first-team selection is batting .331 with 15 home runs and 50 RBI. She has walked 21 times and recorded a .424 on-base percentage, while slugging .683. Svekis has committed just one error on the season, contributing to a .997 fielding percentage, while throwing out 36 percent of runners attempting to steal.

The first-team selection at first base is redshirt sophomore Alyssa Palomino from Arizona. A first-team All-Pac-12 selection, Palomino leads the conference with 18 home runs. She is top-five in the league and paces the Wildcats with a .382 batting average, .789 slugging percentage and .463 on-base percentage, while driving in 40 runs and scoring 30 times.

The second base honoree Aubrey Leach of Tennessee enjoyed a breakout junior season. She leads the NCAA with 80 runs scored and 1.31 runs per game and is ranked nationally in the top 10 in hits and on-base percentage. Leach is second in the SEC with a .441 batting average, .565 on-base percentage and 82 hits. The first-team All-SEC honoree enjoyed a career-best 18-game hitting streak in 2018 and swiped 23 bases in 26 attempts.

Garnering NFCA All-America honors for the first time is Oklahoma third baseman Sydney Romero. Anchoring the hot corner, the first-team All-Big 12 honoree has made just three miscues and recorded a .981 fielding percentage. Offensively, Romero leads the Sooners with 75 hits and 12 doubles. She is hitting .414 with 12 home runs, 61 RBI, 54 runs scored, a .691 slugging percentage and .476 on-base percentage.

Shippy, a senior, garners her third NFCA All-America honor. She is ranked fourth in the NCAA with a .471 batting average and tied for seventh with 81 hits. Shippy was the 2018 Big 12 Player of the Year and is second in runs scored and third amongst Division I players with a .613 on-base percentage, both single-season Cowgirl records.

Beaubien makes her debut as a first-team at-large recipient. The freshman southpaw finished with a 33-6 record, 1.16 ERA and 266 strikeouts to just 46 walks in 217 innings of work. Beaubien twirled three no-hitters and was named the Big Ten’s Freshman and Pitcher of the Year. She leads the NCAA in wins, 32 of which came in the regular season - a Wolverine record - and ranks in the top 15 nationally in ERA, strikeouts, hits allowed per seven innings, and shutouts.

Rounding out our first-team at-large honorees is Drake. The senior returns for a second time after earning second-team honors as a freshman in 2015. The 2018 Sun Belt Player of the Year led the league with 18 home runs, 60 RBI, a .409 batting average, an .862 slugging percentage and 137 total bases. Drake’s slugging, .547 on-base percentage and home runs rank her in the NCAA’s top 20.

Emanuel, the New Balance/NFCA Golden Shoe award recipient, was named to this year’s second team and is now a three-time NFCA All-American. The speedy outfielder has swiped 51 bases in 56 attempts this season. Emanuel is second in the NCAA with 90 hits and tied for sixth with 1.08 runs per game. The first-team All-SEC selection has started all 59 games, hitting a team-best .437 with 64 runs scored and a .464 on-base percentage.