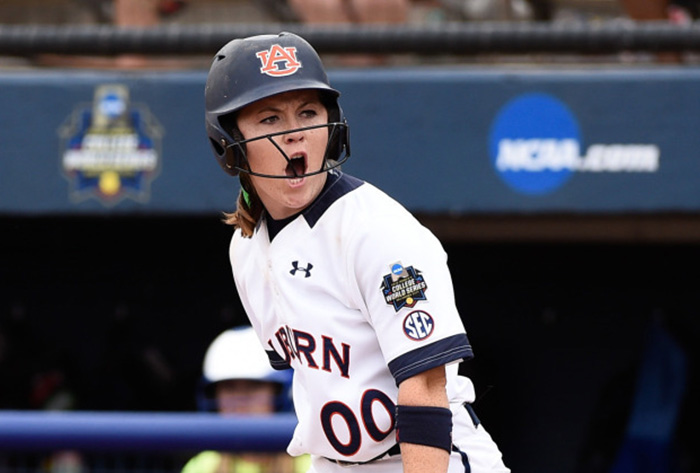 OKLAHOMA CITY – Keyed by a five-run first, No. 4 Auburn topped No. 12 UCLA, 10-3 in game two of the  2016 Women’s College World Series, Thursday afternoon at ASA Hall of Fame Stadium.

Auburn generated five runs on just one hit in the first inning and did not look back. The only hit of the inning, a Kasey Cooper double, put runners on second and third with no outs. With the bases loaded and one out, Jade Rhodes was plunked to knock in the first run of the game. Haley Fagan pushed across the second run with a sac fly to right. Two more hit batters and a two-run error on a misplayed ball at first extended the lead to 5-0.

The Tigers extended their lead to 7-0 in the third on NFCA All-American Emily Carosone’s two-out, two-run single to right.

UCLA got on the board in the top of the fourth courtesy of a three-run long ball to left by NFCA All-American Mysha Sataraka.

Auburn tacked on a run in the fourth and the final two in the sixth on a two-out, two-run double by Cooper.

Cooper finished 2-for-4 with two doubles and two RBI. Rhodes was 3-for-3 with a double, RBI and two runs scored. Fagan knocked in two runs, while Tiffany Howard crossed the dish three times.

Kaylee Carlson (18-2) went the distance for the Tigers. She allowed three runs, scattered seven hits and struck out two.

Selina Ta’amilo did not get out of the first inning and suffered the defeat. In 0.1 innings of work she allowed four runs, three earned, on one hit. She walked one, hit two and did not record a strikeout.