Florida returns to No. 1 in USA Today/NFCA Division I Coaches Poll 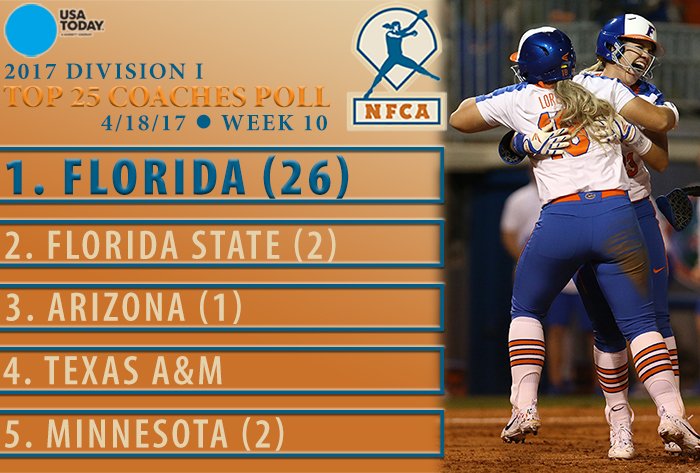 LOUISVILLE, Ky. – Coming off a 4-1 week, which included a victory over then-No. 1 Florida State, Florida returned to the top ranking in this week’s USA Today/NFCA Division I Top 25 Coaches Poll. The Gators (40-3) are back in the No. 1 position since last holding it in the first poll of the regular season on Feb. 14, while the Seminoles have their eight-week run at No. 1 snapped.

UF collected 26 first-place votes and 791 points after posting shutout victories over then-No. 19 Georgia, the Seminoles and then No. 21 Kentucky. After completing the SEC sweep of the Bulldogs on April 10, the Gators walked off with a 1-0 win over FSU snapping the Seminoles’ 24-game winning and 29-game undefeated streaks. They capped off the week taking two-of-three from the Wildcats.

The Seminoles (39-3-1) grabbed two first-place votes and 747 points and fell to No. 2. Playing out of conference, FSU also split a two-game series at RV South Carolina, taking game two, 3-1, following a 7-2 loss a day earlier.

Auburn stayed put at No. 7 with three wins, including two over RV Missouri, while Oklahoma inched up one position to No. 9 after sweeping Kansas in Big 12 action on the road.

Making its first appearance of 2017 is Illinois at No. 25, replacing Big Ten foe Ohio State.

The 2017 USA Today/NFCA Division I Top 25 Poll is voted on by 32 NCAA Division I head coaches, one representing each conference. Records reflect games played through April 16.

Dropped Out: No. 25 Ohio State

The USA Today/NFCA Division I Coaches Poll is voted on by 32 NCAA Division I head coaches, one representing each conference.  Records reflect games played through April 16.