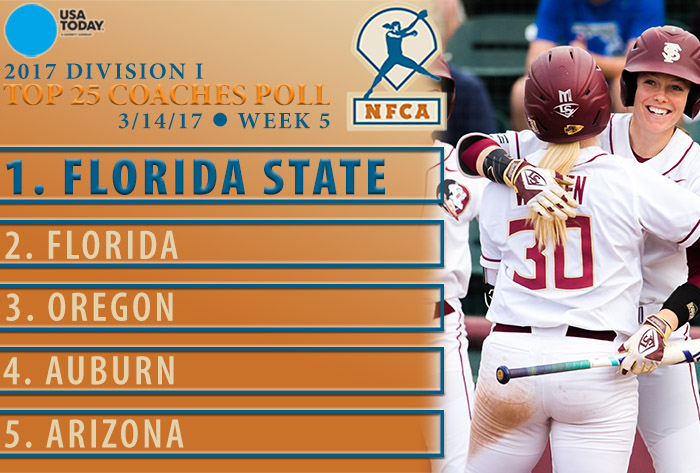 LOUISVILLE, Ky. – Florida State remains the No. 1 team in the USA Today/NFCA Division I Coaches Poll for the fourth consecutive week, announced the Association on Tuesday morning. The Seminoles (22-1-1) enjoyed a 5-0 week, including a three-game ACC road sweep of Virginia Tech.

While FSU (23 first-place votes/787 points) stayed put at No. 1, the teams in the next three spots shuffled around as Florida and Oregon moved up one position each to No. 2 and 3, respectively, while Auburn dropped to No. 4. The Seminoles opened the week with a pair of home shutouts of North Florida and followed with three road win against the Hokies (12-3, 13-2, 5-2).

The Gators (22-1), who received five first-place votes and 760 points, opened Southeastern Conference play with two shutout victories over then-No. 24 Missouri. The due of Delanie Gourley and Kelly Barnhill held the Tigers to just four hits and recorded 22 strikeouts in one and three-hit shutouts, respectively, as UF extended its winning streak to 14 games

Oregon, the only remaining undefeated program in Division I, won all five games as it opened up at home hosting the Oregon Invitational. The Ducks (24-0), who picked up the final four first-place votes (729 points), made quick work of their five opponents, posting four run-rule victories and three shutouts, and outscoring them 54-4.

Auburn won its SEC-opening series against then-No. 12 LSU. The Tigers (21-3) won the opener and finale by identical 5-4 scores, while dropping game two, 8-0.

Arizona remained in the five hole for the second straight week after sweeping through the competition at the CSUN/Loyola Marymount Tournament. With the six convincing victories, the Wildcats (24-1 / 661) extended their winning streak to nine games. UA recorded four shutouts and outscored its opposition, 58-2.

Washington (21-3 / 617) moved up two positions after it posted six wins last week, including two over then-No. 7 and previously undefeated Minnesota (3-2 / 9-0 in five innings).

With Washington’s jump, Texas A&M and the Gophers (21-2) each dropped one spot. The Aggies (21-2) bounced back from a SEC-opening 5-2 loss to Mississippi State to win the final two games of the conference series (5-1, 3-1). Minnesota had its program-record 20-game undefeated start to the season snapped at Washington last week. The Gophers finished 3-2 at the Husky Invitational, falling twice to the hosts.

Oklahoma and UCLA held firm at No. 9 and No. 10 with identical 5-0 weeks. The Sooners (20-4) took care of business at home with a 10-inning 1-0 victory over Tulsa and four run-rule victories, two each, over Omaha and Illinois-Chicago. The Bruins (21-5) won all four of their contests at the Louisville Slugger Invitational hosted by Long Beach State and closed out the week with a 3-2 home victory over RV Texas.

The 2017 USA Today/NFCA Division I Top 25 Poll is voted on by 32 NCAA Division I head coaches, one representing each conference.  Records reflect games played through March 12.

Dropped Out: No. 24 Missouri