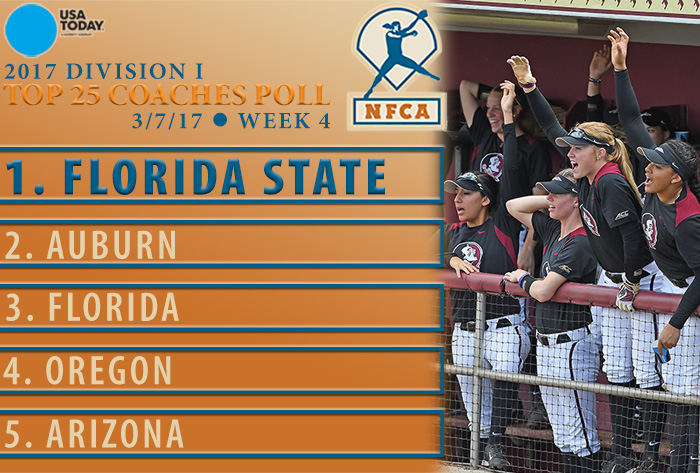 LOUISVILLE, Ky. – For the third straight week, Florida State sits atop the USA Today/NFCA Division I Coaches Poll as the top four positions remain the same. The Seminoles (17-1-1), fresh off an ACC-opening sweep of Georgia Tech, received 17 first-place votes and 778 points. They were one of six programs to receive first-place votes.

FSU sandwiched two Jessica Burroughs one-hit shutouts around a 13-8 victory over Georgia Tech to record its 24th conference sweep in its last 34 series. Extending their winning streak to 12 games over the Yellow Jackets, the Seminoles are now 86-10 in their last 96 contests against conference opponents.

Continuing its steady climb up the poll is No. 5 Arizona (645). The Wildcats (18-1) swept RV Texas in a tightly contested three-game home series, earning 3-0, 2-1 and 4-2 victories over the Longhorns.

The other undefeated team in the top-10, Minnesota, continued its program’s historic start by posting a 5-0 mark at the LSU Invitational, which included a 3-0 victory over host and then-No. 13 LSU. The Gophers (18-0) received the final two first-place votes and received 610 points.

No. 8 Washington and No. 9 Oklahoma remained in their respective positions. The Huskies (15-3) went 4-1 at the Judi Garman with its lone loss to then-No. 22 Baylor, while the Sooners (15-4) enjoyed a 6-0 week, picking up a road win at Wichita State and claiming the Courtyard Marriott championship with five victories, including a 2-1 triumph over Western Kentucky in the title game.

Rounding out the top-10 is UCLA, which fell three spots from No. 7. The Bruins (16-5) were 3-2 at the Judi Garman, picking up wins over then-No. 14 Michigan, host Cal State Fullerton and RV South Carolina, while dropping contests to No. 3 Florida and then-No. 22 Baylor.

Speaking of the Baylor, the Bears (18-4) enjoyed a tremendous weekend at the Judi Garman. In knocking off then-No. 20 Arizona State, then-No. 14 Michigan, No. 8 Washington and then-No. 7 UCLA, Baylor made the biggest jump in the poll, rising seven positions to No. 15.

BYU returns to the poll after a two-week hiatus, while No. 21 Pittsburgh dropped out.

The USA Today/NFCA Division I Top 25 Poll is voted on by 32 NCAA Division I head coaches, one representing each conference.  Records reflect games played through March 5.

Dropped Out: No. 21 Pittsburgh