FSU remains No. 1; Texas A&M rises to No. 5 in USA Today/NFCA Division I Coaches Poll 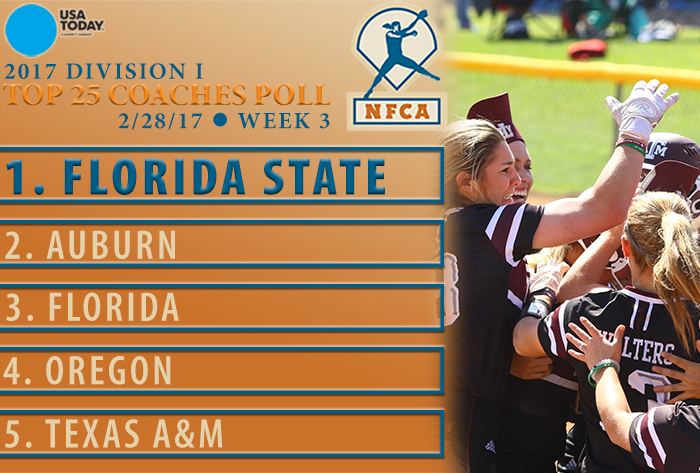 LOUISVILLE, Ky. – As Florida State held on to the No. 1 ranking, Texas &M made the most noise in the USA Today/NFCA Division I Coaches Poll, for games played Feb. 20-26. The undefeated Aggies (15-0), who knocked off the Seminoles (14-1-1) and three other nationally-ranked programs on the second weekend of the prestigious Mary Nutter Collegiate Classic, rose 13 spots to No. 5 in this week’s poll.

Behind a pitching staff that recorded three shutouts and allowed a total of three runs, Texas A&M (603 points, five first-place votes) swept through a loaded field with five wins in Cathedral City. Earning their highest ranking since March 19, 2013 (5th), the Aggies opened play by blanking Long Beach State (5-0) and No. 1 FSU (2-0). After a thrilling 2-1 nine-inning victory over then-No. 21 Arizona State, the Aggies run-ruled then-No. 23 BYU (11-1) and closed out with a 3-0 blanking of then No. 14 Michigan.

The Seminoles (783, 18 first-place votes) rebounded from their tournament-opening defeat to A&M with four straight wins, including one-run victories over Pac-12 opposition, then-No. 9 Arizona (1-0) and then-No. 6 UCLA (2-1), before ending in a 5-5 tie with then-No. 14 Michigan due to a drop-dead time for travel.

Auburn (737, two first-place votes) remained at No. 2 after a stellar performance in the circle, allowing a run over six games. The Tigers (14-2) posted five straight shutouts, including a 4-0 triumph at home over then-No. 13 James Madison. In a rematch with Dukes on Sunday, Auburn dropped a pitcher’s duel, 1-0.

Also staying put was No. 3 Florida (713, six first-place votes), sweeping through the Citrus Classic in Orlando, Fla. The Gators (15-1) continued the theme of strong pitching, surrendering just one run in five games by blanking Fordham, Syracuse, Elon and Lehigh. The lone run allowed came in a 2-1 10-inning victory over Liberty.

Climbing a spot to No. 4 was Oregon (14-0), which stayed undefeated with five wins at the Bank of Hawai’i Invitational.  Arizona jumped past fellow Pac-12 rivals, UCLA and Washington, to claim the No. 6 ranking. Despite dropping their first game of the season, 1-0 to the Seminoles, the Wildcats enjoyed a 4-1 weekend at the Mary Nutter with victories over Louisville, then-No. 23 BYU, Purdue and LIU Brooklyn. UCLA dipped a spot to No. 7 after a 3-2 showing against nationally-ranked foes at the Nutter. The Bruins fell to FSU and then-No. 4 Oklahoma, but did earn wins over then-No. 11 Georgia, North Carolina State and then-No. 7 LSU.

Washington went 4-1 in Cathedral City and stayed put at No. 8, while the Sooners fell five spots to No. 9 following a 3-2 showing at the Nutter. OU did run-rule then-No. 6 UCLA, but dropped decisions to then-No. 15 Tennessee and RV Notre Dame.

Rounding out the top ten is newcomer Minnesota, who continues to enjoy its best start in program history. The Gophers (14-0) grabbed one first-place vote after it stayed undefeated with five wins at Fresno State’s tournament. Minnesota topped UC Davis twice, the host Bulldogs, Cal Poly in eight innings and Idaho State.

The USA Today/NFCA Division I Top 25 Poll is voted on by 32 NCAA Division I head coaches, one representing each conference.  Records reflect games played through Feb. 26.