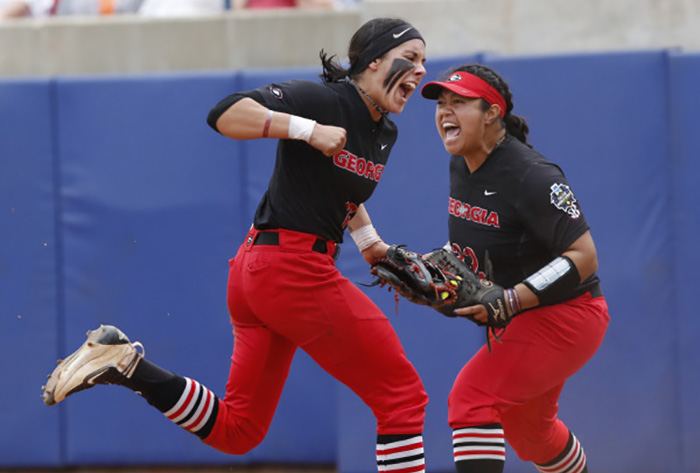 OKLAHOMA CITY – No. 16 Georgia scored an unearned run in the top of the seventh and edged No. 8 Florida State, 5-4, in the opening game of the 2016 Women’s College World Series, Thursday afternoon at ASA Hall of Fame Stadium.

In the seventh, UGA speedster Cortni Emanuel reached on an error to lead off the inning, stole second and moved to third on an overthrow. Emanuel was able to just beat the the throw home to score the game-winning run after Alyssa DiCarlo was retired on a grounder to short.

Georgia scored three of its five runs without the benefit of a hit as FSU matched a WCWS record with seven errors, which led to four unearned runs for the Bulldogs.

NFCA All-Americans Jessica Warren and Alex Powers each hit two-run homers for the Seminoles. Powers finished 2-for-3 with two RBI and a run scored, while Warren scored twice.

The Seminoles jumped out to a quick 2-0 lead in the bottom of the first, courtesy of a first pitch two-run home run by Warren.

Without generating a hit, the Bulldogs answered with two unearned runs in the top half of the second to even the contest at 2-2. Two FSU errors and a passed ball put runners on second and third with no outs. Maeve McGuire and Katie Browne followed with back-to-back sac flies with McGuire’s just short of leaving the yard.

Set up by two infield singles and an error, Georgia took at 4-2 lead in the third on consecutive RBI base knocks by Alyssa DiCarlo and NFCA All-American Tina Iosefa.

Chelsea Wilkerson (28-7) picked up the win with a complete-game effort for the Bulldogs. She allowed four runs on six hits with two walks and a strikeout.

Meghan King (25-4) suffered the defeat in relief. She surrendered an unearned run on four hits with a walk and five strikeouts. FSU starter, Jessica Burroughs, allowed four runs, one earned, in two-plus innings of work.