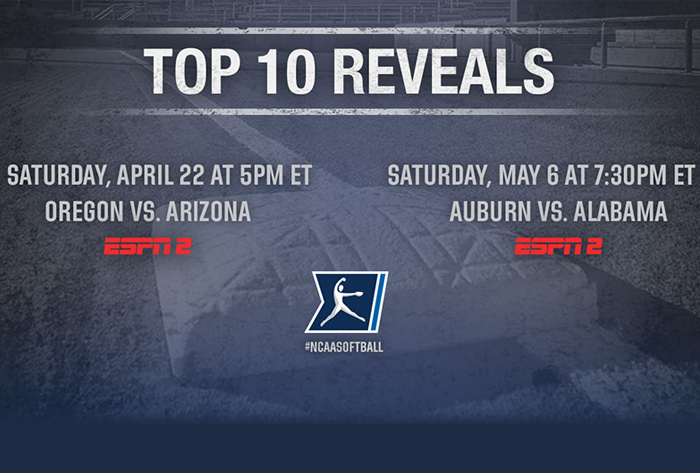 The Division I Softball Committee will reveal two top ten rankings during upcoming games on ESPN2.

The first ranking will be announced on April 22, at 5 p.m. ET during the Oregon vs. Arizona game. The second ranking will occur on May 6, during the Auburn vs. Alabama game. First pitch for that game is slated for 7:30 p.m. ET.

For the second straight year, the sport committee will reveal the rankings ahead of Selection Sunday. The early reveals will give a first glance at potential teams competing for top seed positions in the upcoming 2017 DI Softball Championship tournament.

The ranking announcements will have no bearing on the final bracket that will be revealed on Sunday, May 14.

The rankings are based on the criteria used to select and seed the 64 teams for the Division I Softball Championship and include strength of schedule, Rating Percentage Index (RPI), head-to-head competition, results versus common opponents, significant wins and losses and locations of contests. Additionally, input is provided by the regional advisory committees for consideration by the Division I Softball Committee.

The Women’s College World Series will take place at ASA Hall of Fame Stadium-OGE Energy Field in Oklahoma City, Oklahoma on June 1-7. Eight teams will compete in a double elimination bracket with the final two teams then competing in a best of three format. This year marks the 36th annual NCAA Division I Softball Championship and the 27th time that Oklahoma City and ASA Hall of Fame Stadium-OGE Energy Field will host this premier college softball championship event.