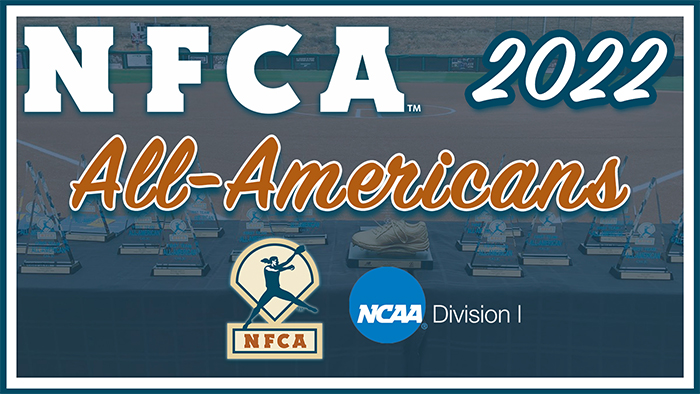 LOUISVILLE, Ky. – Fifty-four student-athletes from 34 different institutions have been voted to one of three 2022 NFCA Division I All-America teams, the Association announced on Wednesday afternoon during its annual press conference at the Women’s College World Series (WCWS).

Oklahoma, the No. 1 overall seed at the WCWS, and Arkansas, the SEC regular season and tournament champions, led the way with five honors each. All five Sooners were named to the first team and four Razorbacks captured first-team nods.

Unanimous first-team selection at Designated Player or Utility/Non-Pitcher Jocelyn Alo is one of three student-athletes who earned the honored distinction of being a four-time NFCA All-American. It marks the third first-team selection for the two-time USA Softball Collegiate Player of the Year and NCAA all-time home run leader.

Joining Alo in the four-time All-America club are second-team honorees Janae Jefferson of Texas (second base) and Washington’s Gabbie Plain (at-large pitcher). The trio brings the list to 40.

Along with her second All-America nod, Davidson was named the 2022 Diamond Sports/NFCA Catcher of the Year which is bestowed on the NFCA’s first-team catcher. Davidson played a pivotal role in helping the Bulldogs reach and host their first-ever Super Regional. An All-SEC first teamer, Davidson hit a team-leading .371 and ranks top-15 nationally with 22 home runs, .549 on-base percentage, .855 slugging percentage and 136 total bases.

Conference USA Player of the Year Bailey Vannoy of Charlotte and Miami University third baseman Karli Spaid, third in the NCAA with 28 home runs, are their program’s first-ever All-Americans. Vannoy was voted to the second team and Spaid to the third team.

Each program participating at the WCWS has at least one All-American and a total of 17 honorees will be on the field at USA Softball Hall of Fame Stadium.

The NFCA All-America teams are voted on by the Association’s All-America Committees. In Division I, the committee is comprised of one selected member head coach from each of the NFCA’s 10 regions. All student-athletes who were nominated by a member head coach and voted to the first-, second or third-team All-Region teams were eligible for All-America consideration.