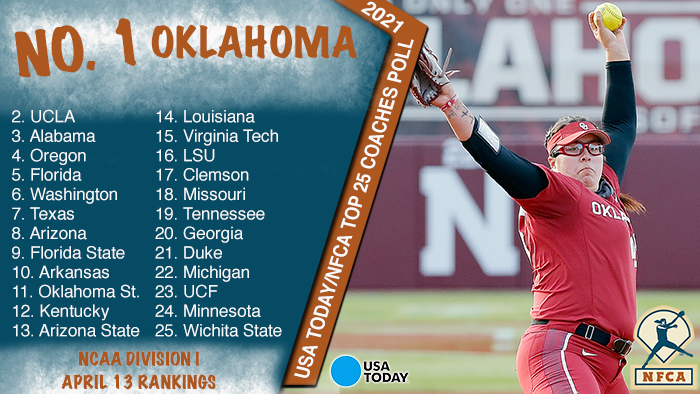 LOUISVILLE, Ky. – Oklahoma cruised to two more wins and enters its seventh consecutive week at No. 1 in the 2021 USA Today/NFCA Division I Top 25 Coaches Poll. The Sooners (30-0) extended their win streak to 37 games following run-rule victories over Mississippi State and Louisiana Tech.

OU returns to Big 12 play this upcoming weekend, welcoming No. 6 Texas to Marita Hynes Field for a three-game set. The Sooners have not lost a league game since 2017 and a series since 2011.

Minnesota (19-5) comes in at No. 24 after a four-game sweep of then-No. 22 Northwestern. The Gophers (19-5), who make their return to the top 25 after being ranked in the first three polls, won a pair of extra-inning affairs, while also earning 6-2 and 10-4 victories in Evanston, Ill.

The other newcomer is No. 25 Wichita State (28-5), winner of nine straight and 18 of its last 20 contests. The Shockers, ranked for the first time in the NFCA’s Top 25, extended their win streak with a four-game sweep of Houston in American Athletic Conference play.

The top 10 had very little movement as No. 3 Alabama and No. 4 Oregon switched spots, and Kentucky, which was tied for 10th last week, fell to No. 12.

Second-ranked UCLA took three-of-four from Oregon. The Ducks (27-5) captured the opener with a 3-0 shutout before the Bruins (22-2) responded with 3-0, 9-3 and 6-2 triumphs. Alabama (31-5) went on the road and earned two wins in a tightly-contested Southeastern Conference (SEC) series at No. 10 Arkansas. The Crimson Tide won the opener, 5-3 and the rubber game, 2-0, handing the Razorbacks (33-5), 4-0 game-two victors, their first two SEC defeats of the season.

No. 5 Florida, No. 7 Texas, No. 8 Arizona and No. 9 Florida State enjoyed undefeated weeks. The Gators took the rubber game from No. 20 Georgia on April 5 and then picked up three non-conference victories over the weekend. The Longhorns earned four road wins, the latter three in Big 12 play against Texas Tech.

The Wildcats (24-5) posted two triumphs over New Mexico State, and the Seminoles (27-6) swept three from then-No. 16 Duke in an Atlantic Coast Conference series. Rounding out the top 10, No. 6 Washington posted a 3-1 series win over Oregon State. The Huskies (31-5) captured all three Pac-12 contests, while dropping the one non-conference tilt.

The 2021 USA Today/NFCA Division I Top 25 Poll is voted on by 32 NCAA Division I head coaches, one representing each conference. Records reflect games played through April 11. Programs not competing in 2021 will not be eligible for ranking consideration.