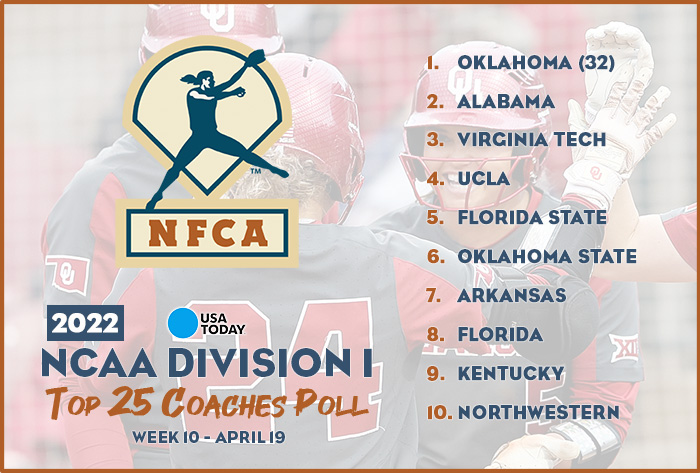 LOUISVILLE, Ky. – Despite suffering its first loss of the season, Oklahoma remained the top ranked team in this week’s 2022 USA Today/NFCA Division I Top 25 Coaches Poll.

In the top five, Alabama leapfrogged Virginia Tech for No. 2, while an idle UCLA overtook Florida State for No. 4. The Crimson Tide (36-6) swept Mississippi State in Southeastern Conference (SEC) play, rebounding from an opening-week defeat at then No. 7 Florida on April 11.

The Hokies (32-6) and Seminoles (39-5) each suffered a knock in Atlantic Coast Conference (ACC) action, but captured their respective league series against Virginia and North Carolina. VT also topped Liberty in mid-week action.

No. 6 Oklahoma State, No. 7 Arkansas and No. 10 Northwestern all earned conference series wins. The Cowgirls (34-7) and Wildcats (30-6) swept through Kansas and Purdue, while the Razorbacks (32-8) defeated then-No. 8 Kentucky in games one and three. Ninth-ranked UK did earn road wins over in-state foe Louisville and in game two at Arkansas.

Florida (34-9) jumped the Wildcats (29-11) for the eighth spot after its early-week win over Alabama and a three-game SEC-series sweep of Ole Miss.

Nebraska enters the poll for the first time since March 22, 2016 The Huskers (33-9) picked up five wins in Big Ten action and ran its win streak to 18 games, the third longest active streak in Division I behind No. 13 Arizona State (20) and Boston University (19).

The 2022 USA Today/NFCA Division I Top 25 Coaches Poll is voted on by 32 NCAA Division I head coaches with one representing each of the NCAA’s Division I Conferences. Records reflect games played through April 17.

Dropped Out: No. 24 Stanford

The 2022 USA Today / NFCA Division I Top 25 Coaches Poll is voted on by 32 NCAA Division I head coaches with one representing each of the NCAA’s Division I Conferences. Records reflect games played through April 17, 2022.