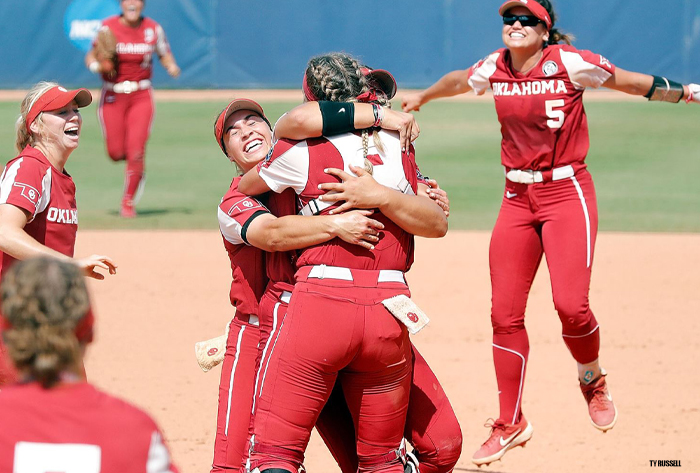 OKLAHOMA CITY – No. 1 Oklahoma captured the 2021 national title with a 5-1 win over No. 10 Florida State in the Women’s College World Series Championship Series finale on Thursday afternoon from USA Softball Hall of Fame Stadium/OEG Energy Field.

After dropping game one to the Seminoles (49-12-1), the Sooners’ (56-4) offense found its groove and Giselle Juarez tossed back-to-back gems leading OU to the program’s fifth WCWS championship, third in the last five seasons.

In the finale, Juarez (23-1) twirled a two-hit masterpiece, striking out seven, walking two and allowing one run. Jocelyn Alo and Jayda Coleman added to Oklahoma’s NCAA-record home run total of 161. Coleman drove in three of OUs five runs, going 2-for-3 with a double, home run and a run scored. Alo also finished 2-for-3.

Alo opened the scoring with her 34th of the season, a solo shot to left in the first inning. Coleman doubled the lead to 2-0, lining an opposite field homer to left.

After RBI infield double (lost in the sun) by Sydney Sherril put FSU on the board with two outs in the third OU extended its advantage to 5-1 with three runs in the bottom half the frame. Following a wild pitch to plate one run, Coleman lined a two-run double off the left field fence.

Both the Sooners and the Seminoles each won four straight elimination games to reach the series. It marked the first time two teams that lost their first WCWS game faced off for the national title.