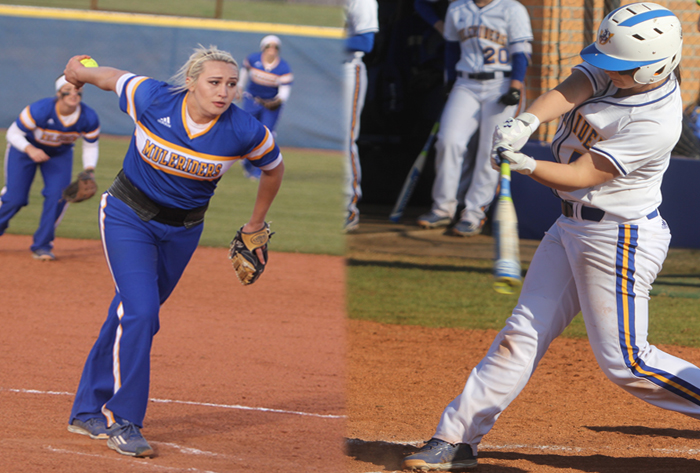 LOUISVILLE, Ky. – Southern Arkansas teammates, senior Darian Harris and junior Kaylee Garner, were named the Louisville/Slugger NFCA Division II National Player and Pitcher of the Week. The duo helped the Lady Muleriders to a 6-0 start to the season as the award was selected for their play during the week of Feb. 1-7.

Harris, a Brazoria Texas native, slugged her way to the NFCA’s first weekly award of the 2016 season. With seven of her eight hits going for extra bases, the first baseman posted a 1.786 slugging percentage and batted .571 (8-14).

“I am so humbled and blessed to receive this recognition,” said Harris. “SAU has been my home for four years, and being able to represent my team is truly an honor. I go to practice every day with a group of girls who push me to be better, and each of them deserve this award as well. This is the most talented group I have been a part of and I am more than excited to see what the future holds for this team. This game has provided me with the craziest, most intense ride and I am extremely thankful for all those who have supported me along the way.”

Half of those hits left the yard, along with two triples and a double, which helped the Great American Conference (GAC) Player of the Week drive in 12 runs and score 10 more. Additionally, Harris walked five times en route to a .684 on base percentage and was flawless defensively, recording a perfect 1.000 fielding percentage in 19 attempts.

“Darian has worked extremely hard since we started in the fall and it definitely showed this weekend,” said SAU head coach Jason Anderson. “She was absolutely dialed in and hit everything they threw at her.  We expect her to be a big run producer for us in the middle of our line up all year.”

Highlighted by her first perfect game, Garner went 3-0 last weekend with two shutouts, 0.47 ERA and held her opponents to a miniscule .064 batting average.

“It is such an honor to be named the National Pitcher of the Week, and I owe it all to the amazing support I have around me,” said Garner. “I'm so thankful for coach Anderson giving me the opportunity to play for such a great university as well as with an amazing group of talented ladies,” said Garner. “Being on a team with a strong defense and an offense that has undeniable power throughout the lineup is incredible to pitch for and gives me confidence. I am also grateful for Randy Lusby at Breakaway Speed for getting me back into pitching shape. I would not be where I am without his guidance and persistence.”

In her first start of the season, the Danbury Texas native was perfect against Lincoln University as she struck out 10 in a 8-0 five-inning victory. She recorded two more five-inning complete game wins during the weekend, including a one-hitter with six punchouts against Texas Women’s. In three starts, the GAC Pitcher of the Week surrendered a run, three hits and two walks in 15 innings of work, while striking out 21.

“Kaylee had a great weekend in the circle against some good teams,” said Anderson. “She showed command of all her pitches and was outstanding in all her starts. Our defense got behind her and we scored some runs for her.  We expect big things out of her this year.”

Selected Top Performances
UMSL’s Hannah Perryman twirled her eighth career perfect game over the weekend, tying the NCAA’s all-time mark and finished 3-0 with a save, 3.33 ERA and 35 strikeouts... Midwestern State’s Katelyn Vinson hit .813 (13-16) with five runs, five RBI and a .857 OBP to pick up Lone Star Player of the Week honors... Hannah Reppert of Armstrong State earned Peach Belt Player of the Week accolades after hitting .636 (7-for-11) with a double, three home runs, five RBI and a 1.545 slugging percentage... Garnering SAC Pitcher of the Week recognition, Carley Tysinger of Catawba went 2-0 with a 0.58 ERA, 23 strikeouts and zero walks, while holding opponents to a 0.98 batting average in 12 innings... Saint Leo's Stephanie Adkins earned complete game wins against No. 3 Shorter and No. 14 Florida Tech and posted a 0.50 ERA and 20 strikeouts to earn Sunshine State Pitcher of the Week recognition... PacWest Player of the Week, Concordia-Irvine’s Charlotte Foster hit .500 (9-18) with four home runs, seven RBI, seven runs scored and a .625 OBP as Concordia went 7-0 to start the season... In earning Peach Belt Pitcher of the Week, North Georgia’s Courtney Poole went 4-0 with a 0.56 ERA and 42 strikeouts... Kelsi Maday of UC San Diego was selected CCSA Player of the Week, hitting .526 (10-19) with seven runs, six RBI and three stolen bases... Pittsburg State’s Emmie Robertson posted a 3-0 record with a 1.00 ERA and 31 strikeouts and did not allow an extra base hit in 21 innings to earn the MIAA Pitcher of the Week nod... PacWest Pitcher of the Week, Concordia-Irvine’s Grayson Harvey earned four wins, posted a 0.70 ERA, struck out 20 and held her opponents to a .129 batting average in 20 innings of work... Backed by a .571 batting average (8-14), three doubles, a triples, seven RBI and four runs, Western Washington’s Alexie Levin helped her team to the GNAC’s Red Lion Team of the Week honor... Gulf South Player of the Week, Hallie Davis of Lee, hit five home runs, knocked in 13 runs, scored seven runs and added a double and triple... Lauren Slatten of St. Edward’s was named Heartland Pitcher of the Week after a 2-1 weekend with a 1.11 ERA and 20 strikeouts in 19 innings of work... North Alabama’s Hillary Carpenter took home Gulf South Pitcher of the Week honors after going 3-0 with a save, 19 strikeouts and holding opponents to a .191 batting average... In three games, Kutztown’s Gabby Tareila went 6-for-7 (.857) with three RBI, three runs scored and posted an. 889 on base percentage... Madison Carter of Lenoir Rhyne was selected SAC Player of the Week after batting .769 with 10 hits, two doubles, five RBI and a .923 slugging percentage... Lone Star Pitcher of the Week, Tarleton State’s Haley Freyman went 5-1 with a 0.41 ERA, four complete games and 23 strikeouts.