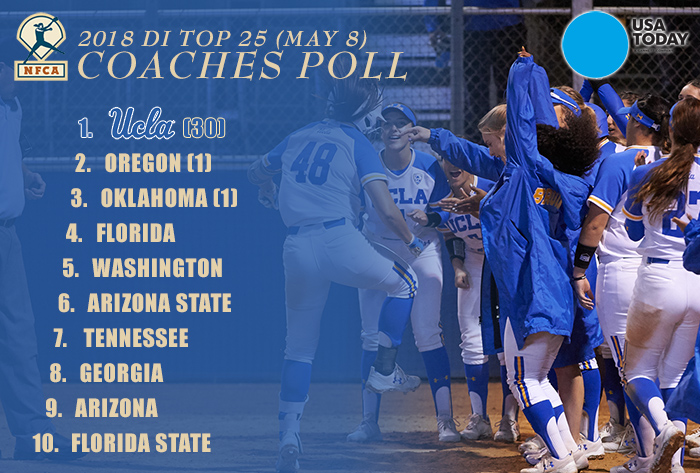 LOUISVILLE, Ky. –  UCLA enters its third week at No. 1 and the top four spots held firm in this week’s USA Today/NFCA Division I Top 25 Coaches Poll. The Bruins (48-3) received 30 first-place votes and 798 points as we head into the final week before the NCAA postseason.

UCLA and No. 2 Oregon head into the final week of Pac-12 play tied atop the league standings with 18-3 marks. The Ducks (44-7), who swept their third straight Pac-12 series against Utah, hold the edge with a 2-1 series win earlier in the year. Oregon heads to No. 24 California, while the Bruins hosts No. 6 Arizona state in the final week of the season. UCLA won four games last week, including a road sweep of the Bears.

No. 3 Oklahoma swept Bedlam from RV Oklahoma State. With the sweep, the Sooners (47-3) became just the second program to finish undefeated in Big 12 play, joining the 1998 Nebraska squad as the only undefeated teams in league play.

No. 4 Florida wrapped up its regular season with a road sweep of Missouri. The Gators (47-8) captured their fourth consecutive SEC regular season title and eighth in program history.

Washington and Arizona State improved to No. 5 and No. 6 this week. The Huskies (44-8) snapped a six-game slide with a road sweep of Oregon State. The Sun Devils (42-9) posted four wins, which included a home Pac-12 sweep of Stanford.

Arizona and Florida State each inched up on spot to No. 9 and 10, respectively. The Wildcats (38-13) stepped out of Pac-12 play, sweeping a three-game home series from Grand Canyon. The Seminoles (44-10), who claimed their sixth straight ACC regular season title last week, closed out league play with a sweep of North Carolina State.

The 2018 USA Today/NFCA Division I Top 25 Poll is voted on by 32 NCAA Division I head coaches, one representing each conference. Records reflect games played through May 6.

The 2018 USA Today / NFCA Division I Top 25 Coaches Poll is voted on by 32 NCAA Division I head coaches with one representing each of the NCAA’s Division I Conferences. Records reflect play through May 6, 2018