Washington and Alabama win twice on Survival Saturday at 2019 WCWS 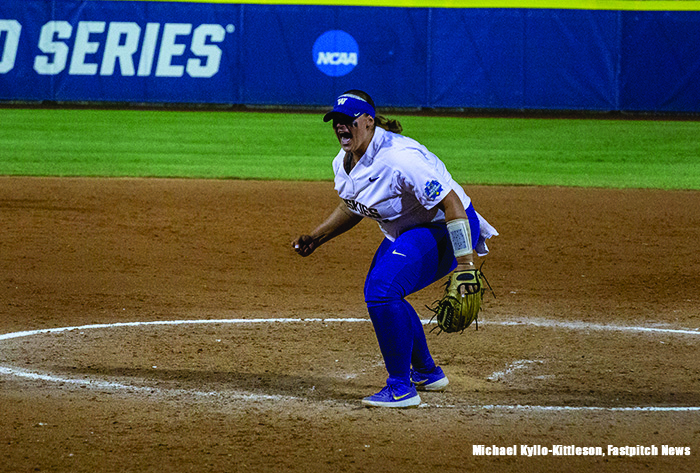 OKLAHOMA CITY– No. 3 Washington and No. 8 Alabama both picked up two wins on Survival Saturday at 2019 Women’s College World Series at USA Softball Hall of Fame Stadium/OGE Energy Field. With the victories Huskies (52-8) and the Crimson Tide (59-9) advance to the national semifinals on Sunday.

In the first elimination games of the day, UW held off No. 7 Minnesota, 5-3, and Alabama run-ruled No. 5 Florida, 15-3 in five innings. The day’s opener featured a three-hour plus weather delay in the top of the sixth.

UW continued the momentum into the evening against No. 13 Oklahoma State. Taran Avelo put the Huskies on her back with a 16-strikeout performance in a 1-0 win. Washington will take on No. 2 UCLA tomorrow at 1 p.m. ET.

The Crimson Tide, behind a Montana Fouts’ three-hit shutout, blanked No. 6 Arizona, 2-0. Alabama will face off against No. 1 Oklahoma at 3:30 p.m. ET.

Should Washington or Alabama win their first games, an if necessary game will be played to determine who will move on to the Championship Series.

Washington held off a seventh-inning rally to defeat Minnesota, 5-3, in the first game on Survival Saturday.

The Gophers loaded the bases with two outs and Carlie Brandt poked a two-run double just inside rightfield line to make it 5-3 and put the tying run on second. However, Washington gave the ball to Alvelo, who struck out MaKenna Partain for the final out and save the game for the Huskies.

UW starter Gabbie Plain had been cruising through 6.2 inning before she got into trouble in the seventh

Washington jumped out to a 2-0 lead in the top of the first. With one out, Morganne Flores hit a first-pitch home run to left center. Sami Reynolds followed by reaching on an error by the shortstop, which ended up proving costly as Reynolds scooted home on a two-out wild pitch.

Carlie Brandt cut the Huskies’ lead to 2-1 with a one-out RBI double off the leftfield wall in the bottom of the third. Emma Burns, who drew a leadoff walk, scampered home all the way from first with the Gophers first run of the contest.

Washington was able to get the run back in the top of the fourth on Sis Bates’ RBI single over the drawn in infield. The Huskies would proceed to load the bases, but Fiser induced a fielder’s choice to second base. After a pitching change, Sydney Smith fanned Emma Helm on three pitches to end the threat.

Washington didn’t need any time to shake off the rust as it scored two runs following the delay. After an error, a pair of singles loaded the bases with no outs in the top of the sixth. A soft liner to second turned into a double play, but after Bates swiped second, Reynold lined a two-run double over the centerfielder’s head, pushing UW’s lead to 5-1.

Alabama exploded for 15 runs on 12 hits and defeated Florida, 15-3, in five innings in the second elimination game. Kaylee Tow, Merris Schroder and Bailey Hemphill each recorded three-run home runs for the Crimson Tide.

Alabama set off some fireworks with a pair of three-run homers in the bottom of the first inning to grab a commanding 6-0 lead. Tow deposited an 0-2 pitch from Kelly Barnhill deep into the rightfield bleachers. With two outs, Schroder went opposite field on a 1-1 offering to double the Crimson Tide’s lead to 6-0.

It marked only the second time in Barnhill’s illustrious career that she allowed six earned run. It also happened to be her shortest start of her career. In a class move, Barnhill reentered in the bottom of the fourth, threw a strike and was removed to a rousing ovation from the crowd. The three-time NFCA All-American finished her career with 1,205 strikeouts.

Alabama pushed its lead to 10-0 courtesy of four-run third, which saw Tow record an RBI double and KB Sides register a run-scoring single. The other two runs scored on a wild pitch and a throwing error.

Hemphill capped off a five-run fourth with her Alabama single-season record 26thhome run, a three-run shot to left centerfield that also gave her the program’s single-season RBI record at 82.

UF’s Kendyl Lindaman homered in the fifth to spoil the shutout. Sophia Reynoso capped off the scoring with a two-run blast to left. Reynoso was 2-for-2 with two RBI and a run scored.

Behind Avelo’s three-hit, 16-strikeout performance, Washington topped Oklahoma State, 1-0 in the third elimination game of the day. The third-team NFCA All-American set a postseason program record with those punchouts and fanned the most batters in a WCWS game since 2012 (Keilani Ricketts (OU) vs. California).

Alvelo was on cruise control from the start as she struck out the side in three of the first four innings, which included 11-pitch first and third innings, respectively. On top of that, the senior did not walk or hit a batter and allowed just three singles. Alvelo’s efficiency was shown in her 95-pitch performance as 72 went for strikes.

The lone run support came in the top of the fourth on a two-out RBI single by Amirah Milloy. Two innings earlier, Milloy was robbed at the fence by Chyenne Factor, who pulled back Milloy’s home run and ended the frame.

Fouts twirled a three-hit shutout as Alabama defeated Arizona in the final elimination game of day. The NFCA second-team All-American struck out nine and walked three to earn her 20thwin on the season.

Hemphill provided the only offense she would need with a two-run double in the top of the third. Her key hit came with two outs after Elissa Brown and KB Sides extended the inning with two-out walks.

The Wildcats had a golden opportunity to score in the fourth after loading the bases with one out. However, Fouts fanned Reyna Carranco and then Hemphill snagged a liner that had eyes for the outfield grass to end the threat.

Carranco recorded two of the Wildcats’ three hits. Alyssa Denham suffered the defeat, allowing two runs on one hit with two strikeouts and two walks in three innings of work. Senior Taylor McQuillin came in and finished off the final four innings with one-hit shutout relief in which she fanned six and issued two free passes.