Washington and Oregon advance to semifinals of 2017 WCWS 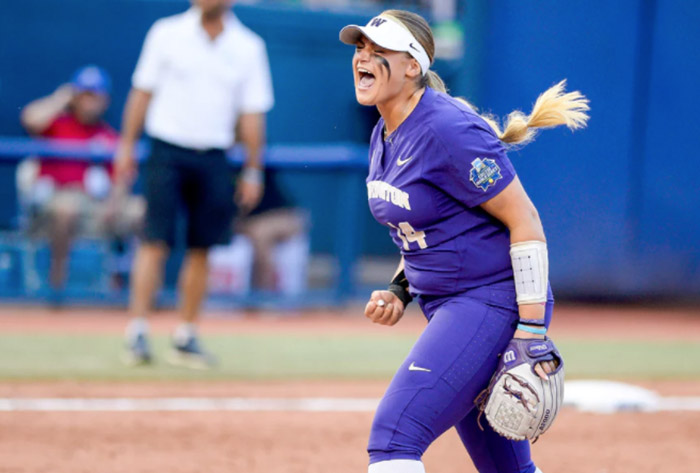 OKLAHOMA CITY – A pair of Pac-12 programs, Washington and Oregon, advanced to the semifinals of the 2017 Women’s College World Series  at USA Softball Hall of Fame Stadium/OGE Energy Field. T The Huskies (50-13) defeated UCLA, while the Ducks (54-7) defeated LSU, 4-1.

Semifinal Sunday starts at 1 p.m. ET with Florida and Washington, followed by Oklahoma and Oregon at 3:30 p.m. ET. If Washington or Oregon win, they will force if necessary games, which will take place during the second session.

In a classic pitcher’s duel between Washington’s Taran Alvelo and UCLA’s Rachel Garcia, Alvelo came out on top thanks to Ali Aguilar’s leadoff home run in the sixth.

Only two runners reached scoring position against Alvelo with the biggest threat coming in the fourth when Kylee Perez reached third with one out. She would fan Madeline Jelenicki and after an intentional walk of Garcia, a line out to third ended the frame.

In the sixth, Augilar sent a 2-1 pitch deep over the rightfield fence for the game’s lone run.

Taylor Van Zee had two hits for the Huskies. Zoe Shaw and Bianna Tautalafua each record base knocks for the Bruins.

Megan Kleist tossed a complete-game five hitter and Gwen Svekis hit a two-run home run keying Oregon to a 4-1 victory over LSU to advance to the semifinals.

Kleist struck out nine and did not walk a batter as she improved to 21-4 on the season. Alexis Mack posted a 3-for-4 evening with two runs scored.

Svekis’ 10th long ball of the season put the Ducks on the board in the bottom of the first.

The Tigers got one back on Shemiah Sanchez’s long blast to leftfield in the top of the second. She finshed the contest with two of LSU’s five hits.

Oregon tacked on single runs in the third and fifth innings to push its lead to 4-1. In the third, Nikki Udria plated Alexis Mack, who reached third after an infield single and a two-base throwing error, with a two-out RBI single. Two innings later, Mia Camuso also provided a two-out RBI single knocking in Udria.