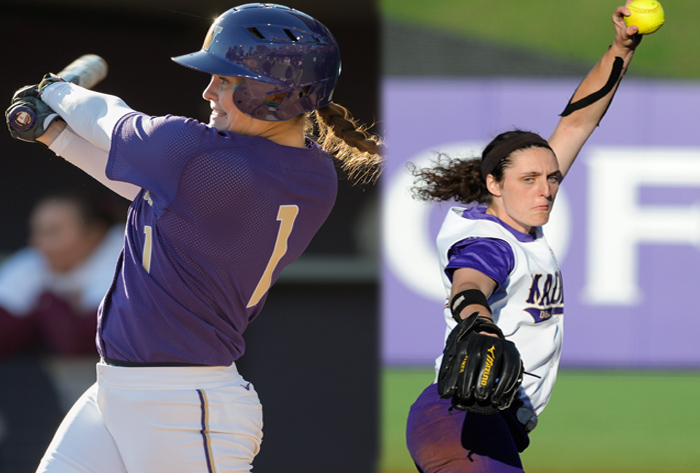 Aguilar, hailing from Orangevale, Calif., helped the ninth-ranked Huskies (9-1) to a 4-1 week at the prestigious Mary Nutter Classic, which included victories over then-No. 15 UCF and then-RV Notre Dame. Aguilar hit .444 (8-18) with four doubles, a triple, two home runs, 15 RBI and nine runs scored. She registered at least a hit, extra base hit and run in each of the five games.

"Even though we didn't leave Palm Springs with as many wins as we had expected, I am so thankful that I get to play with Washington across my chest,” said Aguilar. “It was fun for us to get to play in front of our family, friends and fans because the support we get is unreal. I am grateful to have received this award, and I'm looking forward to another great weekend in Palm Springs this weekend."

Heading Washington’s explosive offense, she went 3-for-4 with a grand slam, career-high seven RBI and three runs scored versus Central Michigan. A day later against UCF, the shortstop knocked in five more runs, doubled and homered. The shortstop also scored twice in victories over UC Santa Barbara and Notre Dame.

"Whenever any of our athletes are named National Player of the Week it's such an honor for our program,” said head coach Heather Tarr. “This was a good week for Ali because she was at her best when her best was needed; she came through in some clutch situations. There's nobody that works harder and embodies the spirit of Husky softball than Ali, so this award is very deserving."

Holding two high-powered offenses to just five hits, Ford played an integral role in the Dukes (9-1) sweeping the competition at the Michele Smith Pediatric Cancer Foundation Invitational and catapulting them to the No. 10 ranking in the most recent USA Today/NFCA Division I Top 25 Coaches Poll. The Hot Springs, Va. finished the weekend 2-0 with a 1.02 ERA and 18 strikeouts in 13.2 innings of work and held her opposition to five hits and a .104 batting average.

“It is truly an honor to be recognized for this weekend’s success, both individually and as a team,” Ford said. “This success would not even be possible without the whole team’s effort. They made crucial plays, both offensively and defensively, against great opponents. Knowing that I have teammates that will always have my back makes a pitcher’s job easier. Overall, it was a very exciting weekend and we hope to continue with our momentum into the coming weeks.”

Ford opened with a two-hit shutout of then-No. 12 Tennessee, striking out nine in a 9-0 five-inning victory. In her next start against previously unbeaten and No. 3 Auburn, the lefty limited the Tigers to a pair of hits and struck out eight in a 3-2 complete-game win. She closed out the week with scoreless and hitless (1K) 1.2-inning save against Oklahoma State.

“I am proud of Jailyn’s performance at the Michele Smith Invite this past weekend,” head coach Mickey Dean commented. “She really showed how much work she has done in the off season. Over the past six months, she has focused more on her team than herself, and it is such an honor for her and our program to be recognized for all the countless hours she has put in.”

Selected Top Performances
SEC Player of the Week, Missouri’s Rylee Pierce, hit .476 with three home runs, 10 hits, 10 runs and eight RBI at the Citrus Classic… ULM’s Rochelle Roberts took home Sun Belt Player of the Week honors after hitting .667 (12-18) with two home runs, 10 runs scored, six RBI and seven stolen bases at the Tiger Classic… Tulsa’s Emily Watson took home American Athletic Conference Pitcher of the Week honors after a 2-0 week without allowing a run and striking out 26 in just 12 innings of work… Georgia’s Chelsea Wilkinson tossed a five-inning perfect game against UAB and totaled three shutouts and held opponents to a .087 batting average to earn SEC Pitcher of the Week honors… MVC Player of the Week, Kelly Kapp of Bradley hit .684 (13-19) with eight runs, five stolen bases and a .700 OBP… Conference USA’s co-Pitcher of the Week, Louisiana Tech’s Preslee Gallaway went 2-0 with a save, did not allow a run in two complete-game shutouts… Northwestern State’s Micaela Bouvier batted .588 with four home runs, 15 RBI, a 1.353 slugging percentage and .696 OBP to grab Southland Player of the Week recognition… Big Ten Pitcher of the Week, Sara Groenwegen of Minnesota went 2-1 with a 0.88 ERA and 20 strikeouts at the Big Ten/ACC Challenge in Tallahassee… Evansville’s Morgan Florey garnered MVC Pitcher and newcomer of the Week plaudits posting three wins, with 23 strikeouts in 13.2 inning of work… Nevada’s Megan Sweet was tabbed WAC Player of the Week after batting .500 (7-14) with three dingers and nine RBI at the DMarini Desert Classic… Conference USA’s co-Pitcher of the Week, Charlotte’s Lexi Betancourt earned four wins, posted a 1.08 ERA and struck out 28…  Taylor Nowlin of Grand Canyon garnered WAC Pitcher of the Week accolades by finishing 2-1 with a 0.84 ERA and 20 strikeouts- she tossed a no-hitter versus Utah State and held opponents to a .154 batting average… Kentucky’s Katie Reed garnered SEC Freshman of the Week honors after batting .524 with three doubles, three long balls, six RBI and six runs scored… Emily Vincent of McNeese State was selected Southland Pitcher of the Week, going 2-0 with a save, two hits allowed, 19 strikeouts and a .054 batting average against… LSU’s Kellsi Kloss launched two grand slams in one game against Bethune-Cookman… Florida’s Aleshia Ocasio finished her week, 3-0 with a 0.36 ERA, a save and 25 strikeouts in 19.1 innings of work… Marshall’s Morgan Zerkle hit .600 (12-20) with two doubles, a triple, home run, six runs and six stolen bases.