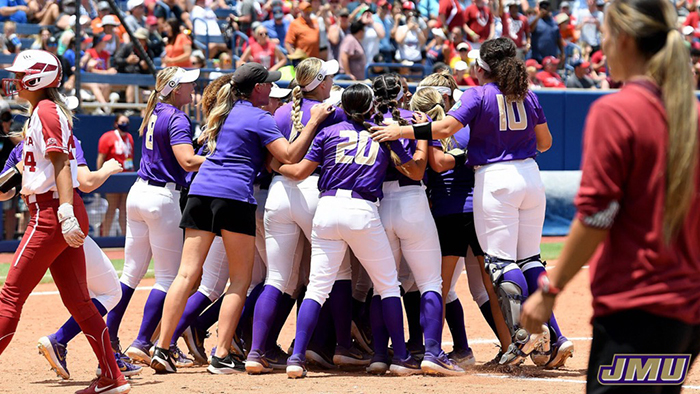 OKLAHOMA CITY – In the opening game of the 2021 Women’s College World Series, James Madison stunned No. 1 Oklahoma in extra innings on Thursday at USA Softball Hall of Fame Stadium/OGE Energy Field. No. 5 Oklahoma State, No. 3 Alabama and No. 2 UCLA picked wins on day one.

In the night session, the Crimson Tide (51-7) defeated the Arizona 5-1 behind Montana Fouts’ 16-strikeout performance and the Bruins (47-5) received a five-hit shutout from Rachel Garcia in a 4-0 victory over the Florida State.

Kate Gordon homered with one-out in the top of the eighth and Odicci Alexander kept Oklahoma’s high-powered offense on its heels lifting the Dukes to 4-3 win and one of the biggest upsets at the WCWS.

Gordon, mired in a postseason slump, deposited a 3-2 pitch of the leftfield fence for the go-ahead long ball, which just happened to be the 69th of her career, a new Colonial Athletic Association record. In the bottom half of the inning, Alexander, facing the top of the order, worked around a one-out walk and induced two flyout to seal the win.

Alexander (17-1) struck out nine, walked two, scatter six hits and limited the Sooners to their lowest run total of the season.

JMU scored the first runs of the WCWS when Sara Jubas connected on the first pitch she saw for a three-run homer to centerfield in the top of the third. The Sooners responded quickly in the bottom half of the inning as NFCA Schutt Sports Freshman of the Year Tiare Jennings cracked a three-run homer of her own to knot the game a three.

Both pitchers rebounded and outside of Madison Naujoukas reaching second in the fifth, neither team managed to move a runner past first until Gordon’s heroics.

Carrie Eberle went the distance and Oklahoma State held off a seventh-inning rally to defeat Georgia, 3-2 on the opening day of the WCWS.

The Cowgirls broke through in the bottom of the third for a 2-0 lead on Chyenne Factor’s two-run homer. After having a runner thrown out at home in the fifth, the Bulldogs finally cracked Eberle for a run in the sixth. Following a single by Sara Mosley, Sydney Kuma came around from second and was awarded home on obstruction.

OSU got the run right back on Alysen Febrey’s RBI single in the bottom half of the sixth.

An RBI double by Ellie Armistead cut the lead to 3-2 and put the tying and go-ahead runs in scoring position. However, Eberle induced a popup and a groundout to end the threat.

Montana Fouts struck out 16 as Alabama opened the WCWS with a 5-1 victory over Arizona. It extended the Tide’s win streak to 19 games.

The junior was dominant in the circle, matching a career high with those 16 strikeouts in a complete-game two hitter. Fouts (25-3), who struck out the side four times, faced the minimum until a solo home run by Jessie Harper spoiled the shutout in the seventh.

Alabama grabbed an early 2-0 lead with the second run coming on a Bailey Hemphill solo homer in the third. The Crimson Tide opened the game up in the sixth courtesy of an RBI double from Maddie Morgan and a two-run pinch-hit homer to left center by Abby Doerr.

Garcia (18-1) struck out 11 and walked two. The Seminoles never really threatened as only three runners reached second base, all with two outs. In each of those three instances, Garcia ended those frames with a strikeout.

Anna Vines’ RBI infield single with two outs fifth scored Kinsley Washington from second base for the first run of the game. The Bruins would tack on three more in the sixth on an RBI double from Delanie Wisz, following by a two-run long ball to center by May Brady.

Vines and Washington recorded two hits apiece for the Bruins.

Kathryn Sandercock (24-3) suffered the loss in a strong outing for the Seminoles. She opened the game retiring the first eight Bruins she faced before an infield single in the third by Vines. Sandercock went 5.2 innings, allowing three runs, two earned on five hits with six strikeouts and one walk.