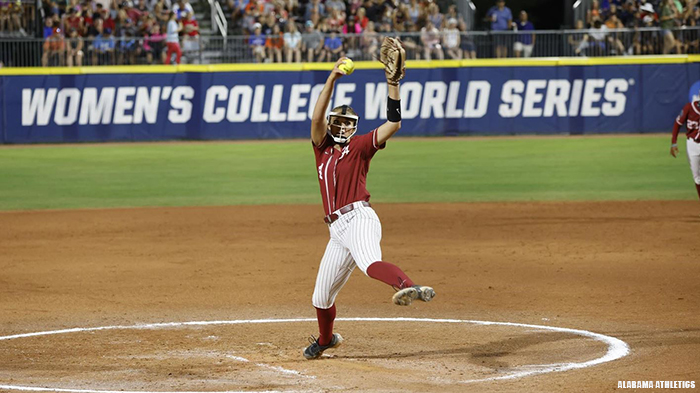 OKLAHOMA CITY – It was a special Friday night at the 2021 Women’s College World Series for No. 3 Alabama and James Madison as the two programs advanced to the semifinals.

A perfect game by Montana Fouts keyed the Crimson Tide (52-7) to a 6-0 victory over the defending national champions and No. 2 UCLA. It was the sixth perfect game in WCWS history and the first since Southern Miss’ Courtney Blades in 2000.

The two squads return to the field on Sunday, June 6 with JMU and Alabama facing yet to-be-determined opponents at 1 and 3:30 p.m., ET respectively.

Two early runs, a complete game from Odicci Alexander and a stellar defensive performance lifted James Madison to a 2-1 over Oklahoma State.

After striking out nine Sooners in the opener, Alexander  (18-1)relied on the defense behind her against the Cowgirls potent offense. She limited OSU to three hits and a run, striking out two and walking two.

Third baseman Lynsey Meeks made a diving stop and strong throw from her knees. First baseman Hannah Shifflett stabbed a liner in the first and made a great stretch on Meeks’ previously-mentioned throw. Shortstop Sara Jubas’ backhand in the five-six hole and throw to third for a force out quieted the Sooners first threat in the second.

Alexander saved the biggest defense play for last in the seventh. With the Dukes clinging to a 2-1 lead, the Cowgirls put runners on second and third with no outs. 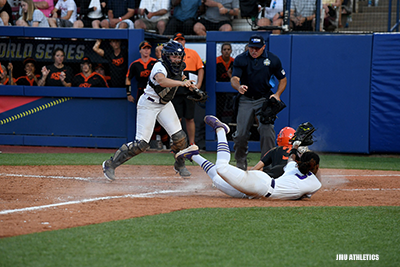 After a shallow foul out to leftfield, Chelsea Alexander dropped down a bunt. Odicci Alexander scooped up the ball, dove and tagged pinch runner Scotland Davis before she could cross home plate to preserve the one-run advantage. She then induced a pop up to seal the victory.

Alexander scored in the bottom of the first when a throw to first base by OSU starting pitcher Carrie Eberle went awry, allowing her to scoot home for a 1-0 lead.

Kate Gordon doubled the lead in the third with a solo blast to left, her second long ball in three at bats at the WCWS.

OSU got on the board in the fifth courtesy of an RBI single to left by Alexander.

Eberle (26-4)suffered the defeat, allowing an earned run on seven hits with one strikeout and two walks. Kelly Maxwell, who entered with no outs and two runners on in the fifth, mowed down JMU with two innings of perfect relief, fanning five of the six batters she faced.

Montana Fouts struck out seven of the first nine batters she faced in route to a perfect game as Alabama topped UCLA, 6-0. The first win over the Bruins in program history extended the Tide’s winning streak to 20 games.

Fouts (27-3) fanned 14 more batters on Friday evening and has struck out 30 over her first two starts.

Alabama struck for two runs in the top of the first on an RBI double to right centerfield off the bat of Bailey Hemphill and Jenna Johnson’s run-scoring single.

Kaylee Tow’s three-run homer in the fifth extended the Tide’s lead to 5-0 and a RBI ground out capped off the game’s scoring.