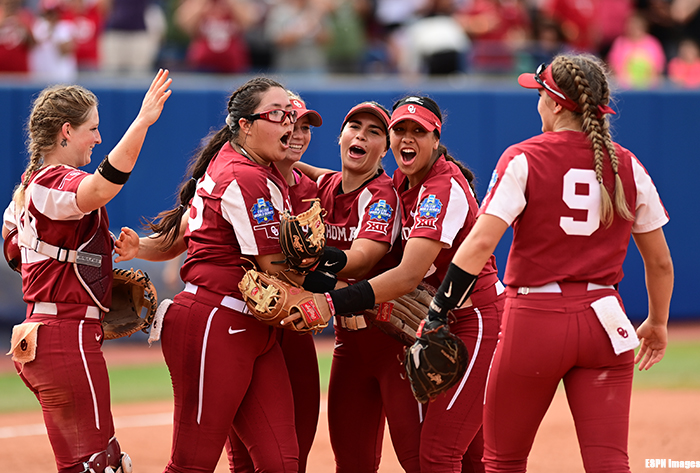 OKLAHOMA CITY – No. 1 Oklahoma and No. 10 Florida State head to the Championship Series after coming out victorious in the winner-take-all seminal games on Monday at the Women’s College World Series.

Both the Sooners and the Seminoles each won four straight elimination games, marking the first time that two teams that lost their first game at the WCWS will face off for the national title. Game one of Championship Series between the Sooners (54-3) and Seminoles (48-11-1) opens on Tuesday, June 8 at 7:30 p.m. ET.

Giselle Juarez was stellar in the circle and the Sooners scored seven unanswered runs, five with two outs, to defeat James Madison, 7-1. It marks the fourth time in the last five seasons, OU has reached the Championship Series. The Dukes (41-4), who became the first unseeded team to reach the WCWS semifinals, had their historic season come to an end.

Kickstarted by Elizabeth Mason’s three-run blast, Florida State jumped out to an 8-0 lead and held on for an 8-5 win over Alabama (52-9). The Seminoles have now won eight straight elimination games at the WCWS and are plying in their second Championship Series in the last three seasons. The Tide’s season comes to a close after reaching the semifinals for the fifth time.

JMU’s Kate Gordon sent the first pitch of the game into the leftfield bleachers. After that, Giselle Juarez twirled a four-hit gem and the Oklahoma offense produced timely two-out hitting in a 7-1 win.

The Sooners scored two runs in the fourth and broke it open with four in fifth. Following the long ball, Juarez (21-1) retired 16 of the next 17 batters, including 14 straight, and finished the contest with 11 strikeouts and one walk. The Dukes only runner in scoring position came with one out in the seventh.

After OU evened the game on a wild pitch in the fourth, the next five runs came with two outs. Jana Johns put the Sooners up for good with an RBI single. An inning later Mackenzie Donihoo and Jayda Coleman each registered two-out, two-run doubles to push the lead to 6-1. Jocelyn Alo closed out the scoring with a solo blast in the sixth.

Coleman, Kenzee Hansen and Nicole Mendes each had two hits for the Sooners.

Odicci Alexander (18-3) suffered the defeat. She allowed six runs on seven hits with three strikeouts and four walks in 4.2 innings. Alissa Humphrey surrendered a run on three hits with a punchout in 1.1 innings of relief.

Florida State offensive erupted for eight run in the first three innings as it topped Alabama, 8-5 in the second winner-take-all semifinal.

The Seminoles put up a pair of crooked numbers as part of eight runs over the first three innings. A three-run homer by Elizabeth Mason gave FSU the early 3-0 advantage in the top of the first. After a run in the second, the Noles pushed across four, all with two outs in the third. Kalei Harding started it with a two-run single through the five-six hole. Kaley Mudge’s RBI single followed by Sydney Sherrill’s RBI double made it 8-0.

Alabama cut into the lead with two runs on a pair of two-out RBI singles by Bailey Hemphill and Kaylee Tow in the boom of the third.

Hemphill’s two-run blast in the fifth and a Savannah Woodard’s RBI single cut the deficit to 8-5 after five.

That would be the closest the Tide would get as relief pitcher Danielle Watson (11-1), the third Nole hurler of the game, allowed just a run on two hits with two strikeouts over the final 2.2 innings of the contest.

Montana Fouts (27-4), who allowed just a run on two hits and struck 30 over her first two starts, suffered the defeat. She  exited with two outs in the third, having allowed seven runs, six earned, on six hits with five strikeouts and three walks. Lexi Kilfoyl get the Tide in the game with 4.1 innings of one-run relief. She fanned four, walked one and scattered six hits.