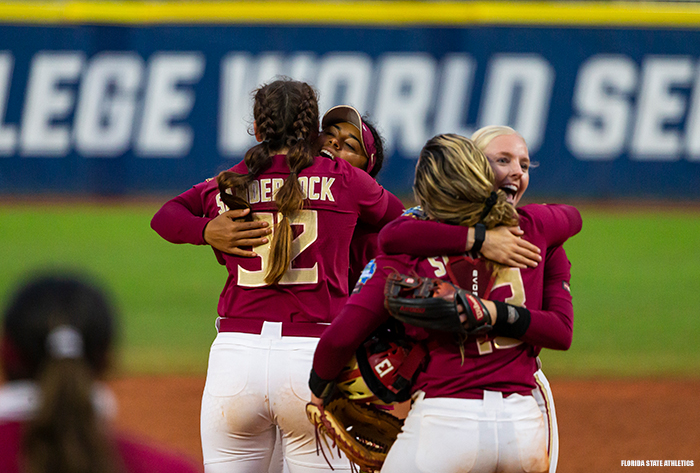 OKLAHOMA CITY – No. 1 Oklahoma and No. 10 Florida State survived their openers on Semifinal Sunday at the WCWS. However, with the Seminoles and No. 2 Alabama not finishing until 8:14 p.m. local time, the NCAA moved both winner-take-all semifinal games to Monday.

With the adjustment to the semifinals, the Championship Series schedule has been pushed to Tuesday, Wednesday and Thursday (if-necessary). First pitch of game one is scheduled for 7:30 p.m. ET.

Oklahoma broke a 3-3 deadlock with a three-run seventh and held off a threat by James Madison in the bottom half to win 6-3 and force a winner-take-all game.

Tiare Jennings’ go-ahead RBI double, along with Kinzie Hansen’s two-run homer did the job in the seventh for the Sooners. Jennings also led off the game with a home run to break the NCAA’s all-time freshman RBI record.

Nicole May (15-1) earned the win with 3.1 innings of shutout relief, striking out six, allowing two hits and not issuing a walk. In the seventh, JMU put runners on second and third and had the tying run at the plate, but May fanned Lynsey Meeks to end the threat.

The Dukes stranded nine runners, unable to get a timely hit the majority of the game.

OU took a 3-0 lead with single runs in the first, second and fourth innings. JMU’s lone big hit with runners on came off the bat of Sara Jubas. She tied the game with two outs in the fourth, connecting on three-run homer to left, her second three-run long ball of the WCWS.

Jubas and Madison Naujokas each had two hits for the Dukes. Jennings was the lone Sooner with two base knocks. Her and Hanson knocked in two runs apiece.

Caylan Arnold and Kathryn Sandercock combined on a two-hit shutout as Florida State forced an if-necessary game with a 2-0 win over Alabama. Dani Morgan scored both runs for the Seminoles, who snapped the Tide’s 20-game win streak, while extending their WCWS elimination-game victory streak to seven.

Arnold started and went the first 4.2 innings, allowing both hits, striking out five and walking one. Sandercock (27-3) earned the win in a perfect relief outing, retiring the final seven batters, six of which came on groundouts. Alabama only had one runner reach second all night.

A bases loaded walk drawn by Sydney Sherrill with two out in the fifth pushed across the game’s first. The Seminoles doubled their lead an inning later. With two outs Morgan tripled to right center and Josie Muffley followed with an RBI single through the right side.

Lexi Kilfoyl (13-4) suffered the defeat in a strong outing for the Tide. Going the distance, she scattered seven hits, struck out nine and walked two. Bailey Hemphill and Maddie Morgan each singled for Alabama.