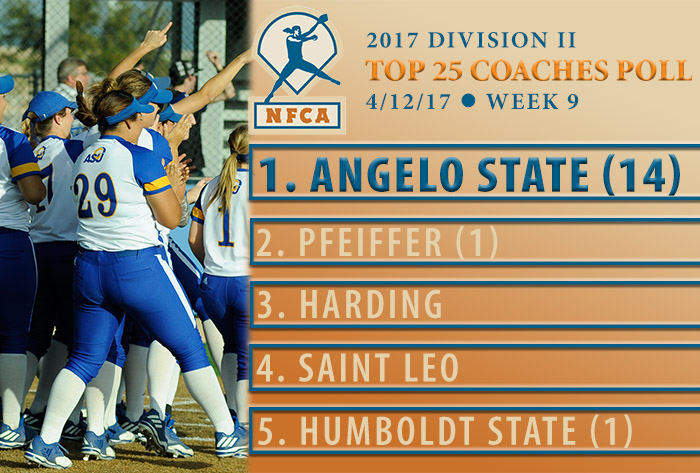 LOUISVILLE, Ky. – Angelo State reclaimed the No. 1 ranking in the NFCA Division II Top 25 Coaches Poll. Returning after a one-week hiatus, the Rambelles (41-4) were nearly unanimous, receiving 14 of a 16 possible first-place votes.

Angelo State became the first Division II program to reach the 40-win plateau and join Division I Arizona as the first two NCAA 40-game winners. The Rambelles rebounded from a pair losses to post six straight wins, including five last week. They picked up a pair of road win at Texas A&M University International (2-1, 8-0) before sweeping a Lone Star Conference series from Midwestern State (8-0, 6-2, 3-1).

With previous No. 1 Humboldt State falling to No. 5, Pfeiffer, Harding and Saint Leo each shifted up one spot, respectively.

The No. 2 Falcons (35-3) swept a Conference Carolinas doubleheader from Southern Wesleyan (5-4, 9-1) to extend their winning streak to eight. The third-ranked Bison (38-4) won their first two games of the week against Arkansas Tech (4-3, 1-0) before having their 27-game winning streak snapped at East Central (1-0). They did rebound to take the final three games from the Tigers in Great American Conference play. The Lions (34-7) moved into the four spot after sweeping a three-game Sunshine State Conference series at Florida Tech (11-3, 7-0, 11-0).

Dropped Out: No. 14 Indianapolis, No. 17 Armstrong State.

The NFCA Division II Top 25 Poll is voted on by 16 NCAA Division II head coaches with two representing each of the eight NCAA regions.