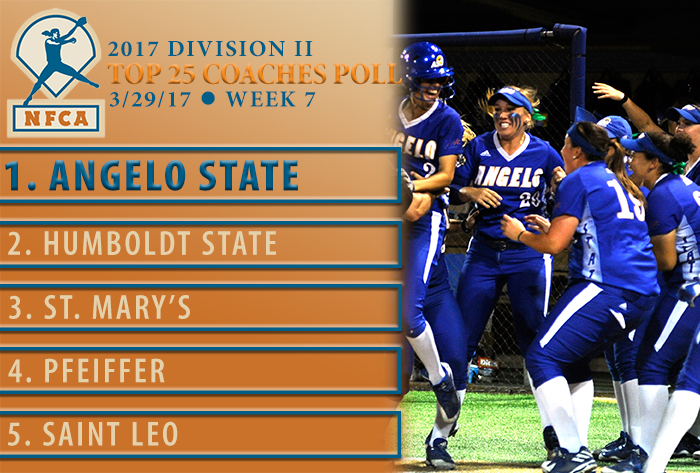 LOUISVILLE, Ky. – Angelo State is the unanimous No. 1 in the NFCA Division II Top 25 Coaches Poll, strengthening its hold one week after achieving the top ranking for the first time in five years.

The Rambelles (35-2) received 16 first-place votes and 400 points after putting together five wins last week. Bouncing back from only its second loss of the season, Angelo State swept a mid-week twinbill at St. Edwards and following with a three-game home sweep of Texas Woman’s in Lone Star Conference play. The Rambelles have now won 31 of their last 32 contests.

An idle Humboldt State moved up two spots to No. 2, while St. Mary’s, Pfeiffer and Saint Leo round out the top five. The Rattlers (25-6) collected five wins at home, knocking off Texas A&M Kingsville in a doubleheader and sweeping a Heartland Conference series from Rogers State. The Falcons (29-3) won both ends of their doubleheader at Lees McRae and the Lions (28-7) picked up three wins in Sunshine State Conference play at Florida Southern.

No. 6 Harding (29-3) is riding a 21-game winning streak after four more wins on the road at Southern Nazarene. Chico State stood pat at No. 7. No. 8 Southern Arkansas and No. 9 Valdosta State fell out of the top five, each suffering two defeats in conference series. Southern Indiana and West Texas A&M return to the top 10, tying for the 10th spot.

Making the biggest moves were Armstrong State and Adelphi, coming in at No. 13 and 23, respectively, both returning to the polls since falling out on March 1. North Georgia tumbled 15 spots to No. 17.

Dropped Out: No. 16 Central Oklahoma, No. 21 Southern New Hampshire, No. 25 Missouri-St. Louis