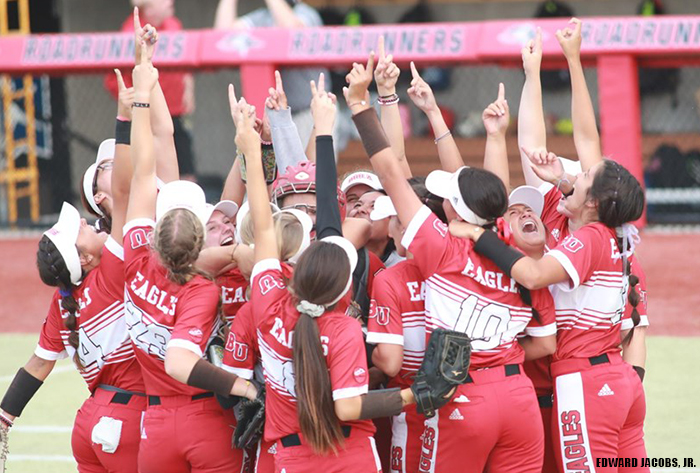 DENVER, Colo. - Fifth-seeded Biola and sixth-seeded West Texas A&M will face off for the 2021 NCAA DII title. The Eagles (25-14) and Lady Buffs (41-11) each went 3-0 to earn their first berths into the Championship Series held at the Assembly Athletic Complex on the campus of Metropolitan State University of Denver.

WT is look for its second national championship, winning it all in 2014 (Championship Series was instituted in 2016).

First pitch for game one of the Championship Series is scheduled for Sunday, May 30 at 7:30 p.m. ET. Game two is Monday, May 31 at 2 p.m. ET with an if-necessary game following should it be needed.

Biola held off a late rally by No. 4 North Georgia and captured the first semifinal, 5-2, while the Lady Buffs used a pair of four-run innings to knock off the defending champion Augustana Vikings, 9-4 in the second semifinal.

North Georgia stayed alive, walking off with a 1-0 victory in a classic pitcher’s duel. A one-out squeeze by Cheyanne Mosteller scored Madi Perry in the bottom of the seventh, sending the NightHawks to a semifinal matchup with Biola. UNG was shutout by the Eagles on day one of the tournament.

Kylee Smith picked up the win with a two-hit shutout. She struck out nine and walked one. Smith struck out the side in the second and third innings and did not allow a runner past first base.

Saint Anselm’s Morgan Perry was on the other end the dual. She allowed just the run on four hits with one punchout and two walks.

Mallory Parker was 2-for-3 with a triple for UNG. Brie Klaiber and Kylie Fitzpatrick were the lone Hawks to record singles.

After being shut out on Friday, Augustana’s bats returned in a 13-2 win over Grand Valley State to set up a semifinal matchup with West Texas A&M. The Vikings exploded for 13 runs on 17 hits, scoring multiple runs in four of the five innings.

The offensive barrage came against Laker hurler Hannah Beatus, who had allowed an earned run and put forth two strong outings prior to this contest.

Torri Chute was one of the many catalysts, going 4-for-4 with a triple, homer and six RBI (coming in her first three at bats). Abbie Lund finished 3-for-4 with two runs and four other Vikings registered two hits. Kendall Cornick and Gracey Brink each scored three times.

Lydia Goble and Nikoma Holmen hit back-to-back no doubters to start the fourth for the Lakers, but Augustana responded with three more in the fifth to push the advantage to 11.

Kayla Neff hit a three-run home run and Paige Austin provided more shutout pitching as Biola held off a late North Georgia rally for a 5-2 win and a ticket to the National Championship Series.

Austin extended her scoreless streak to 19.1 innings. She started and went the first five innings, limiting UNG to four hits and striking out three with a walk. With the bases loaded and the winning run to the plate in the seventh, Austin reentered and unofficially saved her win with a strikeout.

An RBI ground out in the third put Biola on the board. Two batters later, Neff launched a three-run long ball to left center to extend the lead to 4-0. They would add an insurance run in the seventh on a Kiana Meriales RBI single.

The NightHawks would not go down quietly against relief pitcher Raylene Roybal, loading the bases in the seventh. With two outs, a run-scoring single by pinch hitter Marley Holmes and a bases loaded walk drawn by Gracie Mixson brought the winning run to the plate. Mixson finished 3-for-3.

However, Austin reenter and slammed the door shut. It marked the second straight inning UNG left the bases loaded as it left 12 runners on base for the game.

West Texas A&M used a pair of four-run innings to top Augustana, 9-4, and earn a trip to the Championship Series.

Highlighted by a Gabriella Valforte two-run homer, the Lady Buffs jumped out to an early 4-0 lead in the top of the second. The Vikings the lead in half in the bottom of the fourth on RBI single by Abby Lien and a bases loaded walk drawn by Amanda Dickmeyer.

After Augustana cut the deficit to 5-3 in the bottom of the fifth, WT put its second four spot on the board in the top of the sixth. A pair of Augustana errors and two Lady Buff sac flys aided in the inning that saw all four runs unearned.

A triple by Mary Pardo and an RBI infield single gave Augustana life in the seventh. Following a walk put runners on first and second, a foul out and a third to first double play squashed the rally and capped the victory for West Texas A&M.

Both squads finished the game with nine hits. Kyra Lair (23-5) earned the victory in 3.2 innings of relief. Seven different Lady Buffs finished with a least one RBI with Valforte driving in two.

Cornick and Lien finished with two hits apiece for the Vikings.