Colorado Mesa ascends to No. 1 for first time in program history 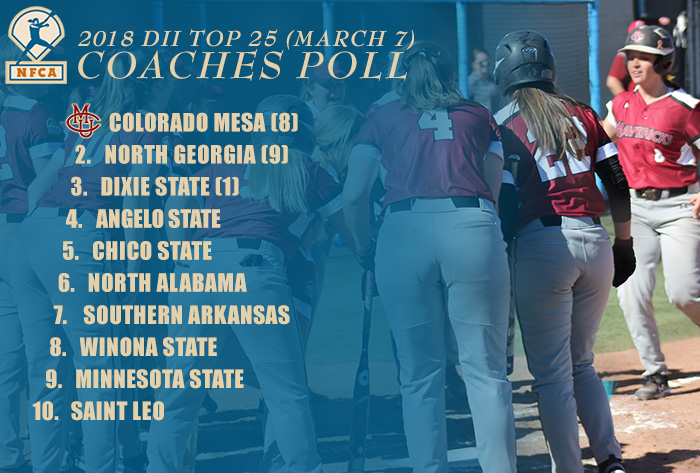 CMU put together a 6-0 week, which saw the Mavericks push across 72 runs as they recorded six Rocky Mountain Athletic Conference wins. The weekend was highlighted by a 22-4 thumping of Adams State, marking the second time this season the Mavericks scored more than 20 runs in a contest.

The NightHawks (24-1), which earned nine-first place votes, remained at No. 2 following a 3-1 week at home. North Georgia suffered its first loss of the season, upset by Coker, 3-2. It ended their 23-game winning streak. They did knock off the Cobras, 14-1, and added two victories over Flagler.

Dixie State, who picked up the final first-place vote, remained undefeated with three PacWest Conference triumphs over Notre Dame de Namur. The Trailblazers (18-0), along with the No. 1 Mavericks, are the two remaining undefeated teams in the top-25.

Angelo State and Chico State moved up to No. 4 and 5. The Rambelles (19-1) extended their winning streak to 18 games with a midweek doubleheader sweep of St. Edwards. The Wildcats (18-1) suffered their first defeat of 2018 as they split a California Collegiate Athletic Association twinbill with Stanislaus State.

The next three programs joined the top-10 this week as North Alabama, Southern Arkansas and Winona State come in at No. 6,7 and 8, respectively. The Lions (15-2) have won 15 straight, including five last week in Gulf South Conference play. The Lady Muleriders (16-2) won all six of their Great American Conference matchups.

The Warriors (11-2) catapulted 11 spots from No. 19 after a 4-0 week at the Spring Games in Florida, which included victories over previous No. 1 Minnesota State and then-No. 13 Southern Indiana.

The Mavericks (11-2) fell from the top spot to No. 9 after suffering their first two losses of the season against Grand Valley State and Winona State. Minnesota State opened its Florida trip with wins over Urbana and Hillsdale before having its 17-game winning streak snapped.

Saint Leo fell to No. 10 after a 2-3 week. The Lions (14-6) swept Flagler before being swept in a three-game Sunshine State Conference series at Embry-Riddle.

The 2018 NFCA Division II Top 25 Poll is voted on by 16 NCAA Division II head coaches with two representing each of the eight NCAA regions. Records reflect games played through March 4, 2018.