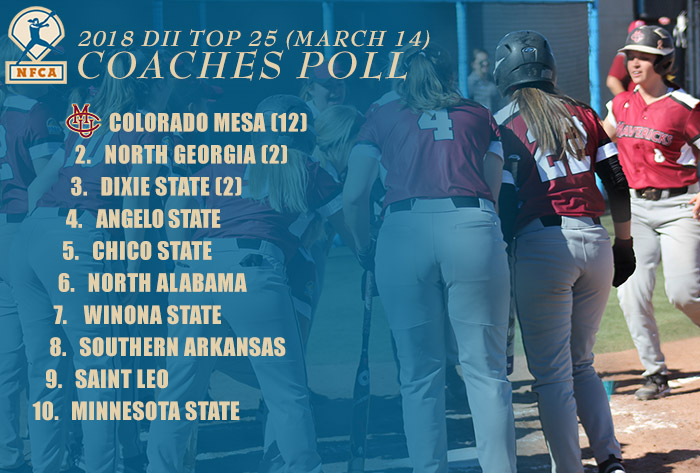 LOUISVILLE, Ky. – Undefeated Colorado Mesa continued as the No. 1 program in the NFCA Division II Top 25 Coaches Poll. The Mavericks (22-0) increased their hold on the top spot, gathering 12 first-place votes and 394 points.

CMU hit the road and swept a Rocky Mountain Athletic Conference series from New Mexico Highlands. The Mavericks offense exploded for 56 runs, including 23-0 and 14-0 victories over the Cowgirls.

The next five spots remained the same. North Georgia had a light week, sweeping Lee in a non-conference doubleheader at home, while No. 3 Dixie State was idle as it packed for its PacWest Conference trip to Hawai’i. Both programs received two first-place votes.

No. 6 North Alabama continued to roll as it took care of Miles before taking all three Gulf South Conference contests from Shorter. The victories extended their winning streak to 18 games.

Central Region foes Winona State and Southern Arkansas flip-flopped the No. 7 and 8 spots. The Warriors (17-2) capped off their spring break trip in Florida with six wins, including a win over new-No. 23 Grand Valley State, to run their winning streak to 14 games. The Lady Muleriders (19-3) went 3-1 on the road in Great American Conference play, dropping the final game of a four-game set at Southern Nazarene.

The 2018 NFCA Division II Top 25 Poll is voted on by 16 NCAA Division II head coaches with two representing each of the eight NCAA regions. Records reflect games played through March 11, 2018.