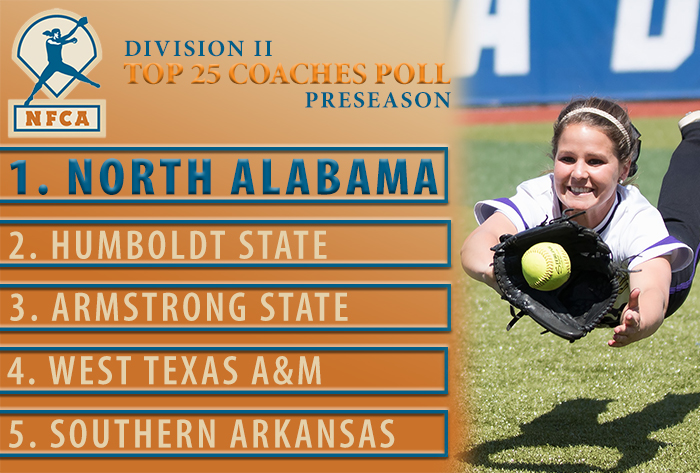 LOUISVILLE, Ky. – Coming off a historical season and the program’s first national championship, the University of North Alabama was unanimously voted the No. 1 team in the 2017 NFCA Division II Top 25 Preseason Coaches Poll, announced the Association on Wednesday morning.

Collecting all 16 first-place votes and 400 points, the Lions capped their record-setting campaign with a 60-7 record and the 2016 NCAA Division II national title. Under the guidance of head coach Ashley Cozart, UNA defeated preseason No. 2 Humboldt State in the three-game championship series. Also picked unanimously to win the Gulf South Conference, the Lions rebounded from a game-one loss with 10-1 and 4-1 triumphs over the Jacks (54-8-1).

Humboldt State (384 points), returned to the NCAA Championship Tournament for the first time since 2013 and made its sixth overall appearance. It was the two-time national champions second runner-up finish.

The NFCA Division II Top 25 Poll is voted on by 16 NCAA Division II head coaches with two representing each of the eight NCAA regions. Final 2016 records and rankings are shown and first-place votes are in parentheses.