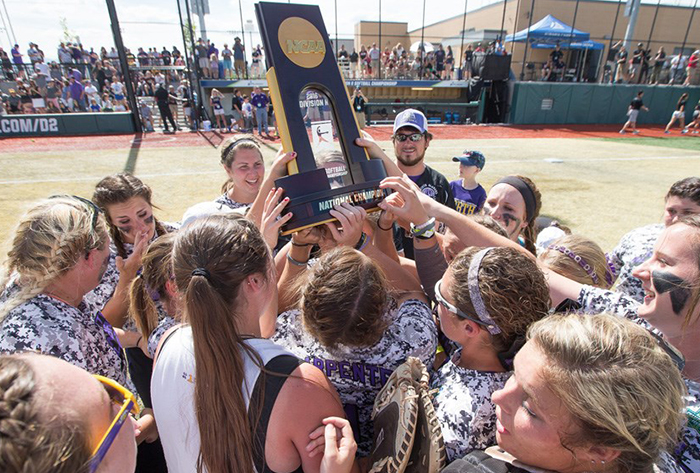 Completing a historical campaign with a 60-7 record and the NCAA Division II National Championship, the Lions, under the guidance of head coach Ashley Cozart, defeated Humboldt State in the three-game Championship series. UNA rebounded from a 5-0 game-one loss with 10-1 and 4-1 victories. The Lions went 11-2 in the postseason, suffering its first loss on the second day of regionals to UAH, which forced them to battle from the losers bracket. North Alabama reeled off three straight shutout wins over Saint Leo (1-0) and UAH (7-0 & 7-0) to advance to Super Regionals where it swept Rollins (9-0, 6-5).

National runner-up Humboldt State finished just short of it third national championship falling to North Alabama. The Jacks (54-8-1) posted a 9-3 mark in the postseason and was one of two programs to have an undefeated run to the National Championships. HSU won five games during regionals and super regionals and continued its run with victories over Armstrong State (3-2) and West Texas A&M (8-5) before dropping one game to Armstrong in the semifinals. The Jacks rebounded with a 6-2 win over the Pirates, advancing them to the Championship series.

National semifinalists Armstrong State and Southern Arkansas come in at three and four. The Pirates (43-15) put forth an 8-3 record in postseason, sweeping the Southeast Regional and going on the road a knocking off the defending national champion North Georgia Nighthawks in three games (0-4, 4-2, 5-3 in 8 inn.). After dropping its opener at the Championships, Armstrong State won three straight and forced an “if-necessary” game with Humboldt State in the semifinals.

Making their first National Championships appearance, Southern Arkansas enjoyed its most successful season in program history. The Muleriders (53-11) won their first regional and super regional, while setting a program-record for wins. SAU also enjoyed an undefeated postseason run into the Championships. They to rebounded from an opening day loss to North Alabama with triumphs over Charleston (7-0) and West Texas A&M (7-4) before falling to the Lions in the semifinals.

The final four Championship participants, West Texas A&M, Adelphi, Grand Valley State and University of Charleston fill in your No.5 to No. 8 rankings. The Lady Buffs (59-5) and Panthers (35-22) each went 1-2 at the Championships with WT recording a 7-3 postseason mark and AU finishing 6-2. The Lakers (43-13) and the Golden Eagles. (50-12) finished 6-2 and 5-3, respectively in the postseason, both winning their super regionals on the road. UC made its first National Championships appearance.

Rounding out the top-10 are Super Regional participants North Georgia and Arkansas Tech. The Nighthawks (54-8) swept through their regional and won game one against Armstrong State, but dropped two games to the Pirates on the second day. The Golden Suns (49-11) posted three shutouts to win their regional, but were swept by Southern Arkansas at home to close out the season.

Along with Adelphi, Grand Valley State and Charleston, Rollins, Colorado Mesa and Georgia College all return to the top-25 at the end of the season.