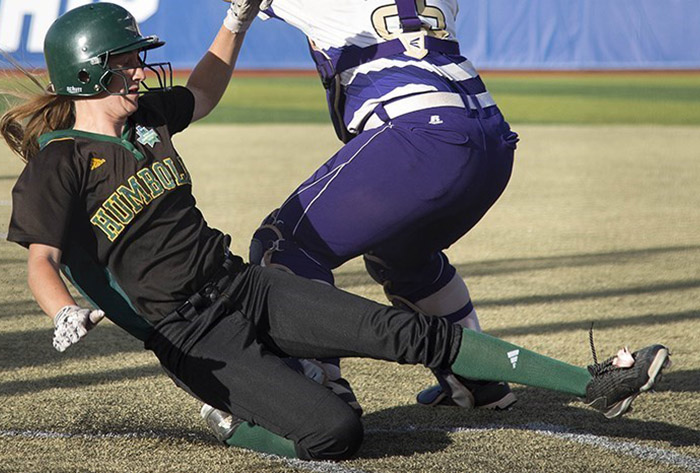 DENVER, Colo. – No. 5 Humboldt State is one win away from its third national championship after Madison Williams tossed a three-hit shutout in a 5-0 win over No. 3 North Alabama in game one of the Division II National Championship series on Friday evening from the Regency Athletic Complex on the campus of Metropolitan State University of Denver.

Prior to the game one win, the Jacks (54-6-1) earned their berth into the championship series with a 6-2 win over No. 16 Armstrong State in the “if necessary” semifinal game.

Madison Williams twirled a three-hit masterpiece to lead Humboldt State to a 5-0 win over North Alabama in the first game of the Championship Series. The junior surrendered just three hits to the nation’s third-best offense, struck out five and did not walk a batter to improve to 26-3 on the season.

The Jacks took advantage of an error to grab a 1-0 lead in the first. Three run-scoring singles in the fourth by Kalyn Paque, Cyndi Chavez and Hannah Holland gave HSU a 4-0 advantage. A sac fly by Sydney Roberts pushed across an insurance run in the sixth.

Paque and Hollingsworth each went 2-for-3 at the plate with Paque recording a double and scoring two runs.

Brooklynn Clark, Madeline Lee and Bailey Nelson each generated one hit for the Lions.

Powered by a four-run fourth, Humboldt State earned a 6-2 win over Armstrong State to advance to the 2016 National Championship series. Reaching the semifinals and posting three wins, the Pirates (43-15) made their deepest run in their third trip to the National Championships.

Following three scoreless innings, HSU put a four-spot on the board in the top half of the frame. Paque broke the deadlock with a two-run home run to left. Chavez and Holland each drove in a run with a double and single, respectively.

The Pirates got on the board in the fifth on a Peyton Roth RBI single, but the Jacks would push their lead to 6-1 on a run-scoring singles up the middle by Holland and Tiffany Hollingsworth.

Holland finished 2-for-3 with a double, two RBI and two stolen bases. Katie Obbema improved to 24-3 with a complete-game effort. She scattered eight hits, struck out seven and walked one.