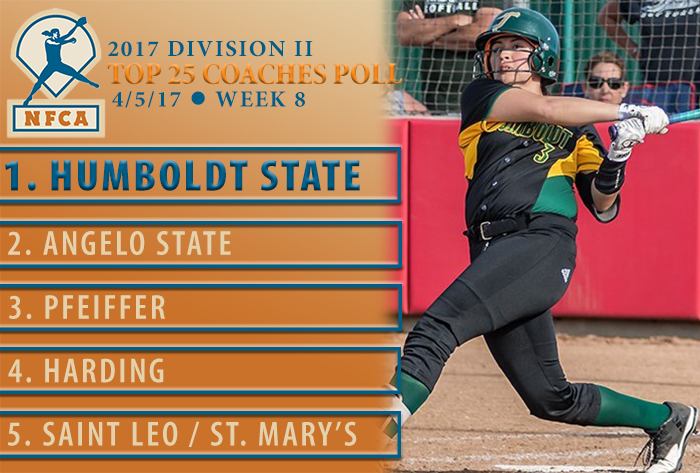 LOUISVILLE, Ky. – Following a 5-1 showing at the Tournament of Champions, Humboldt State returned to No. 1 in this week’s NFCA Division II Top 25 Coaches Poll. The Jacks (26-5) switched places with Angelo State, who dropped a pair of Lone Star Conference contests.

Humboldt State, which received five first-place votes and 382 points, is back after falling from the top position two weeks ago. The Jacks picked up wins over Hawai’i Pacific, Hawai’i Hilo, Azusa Pacific, Chaminade and Notre Dame de Namur.

The Rambelles (36-4), who garnered six first-place votes and 379 points, fell to No. 2 following two weeks in the No. 1 position. Angelo ran into a Tarleton State program who already has wins over St. Mary’s and West Texas A&M (2). The Rambelles were shut out by the TexAnns in the series-opening doubleheader (0-2, 0-4) before salvaging the final game of the series, 9-2.

Pfeiffer and Harding moved up to No. 3 and No. 4 with identical 33-3 records and received three and one first-place votes, respectively. The Falcons have won six straight and 17-of-18 after four wins in which they outscored their opposition, 29-4. The Bison are the hottest team in Division II, rattling off 25 straight heading into this week. Harding captured all four games in a hard-fought four-game Great American Conference sweep of Southeastern Oklahoma State, including a pair of extra inning affairs (2-1 in 8 in. / 4-3 in 12 inn.).

Saint Leo (one first-place vote) and St. Mary’s shared the No. 5 spot posting three and four wins, respectively. The Lions (31-7) swept a home Sunshine State Conference series from Barry, while the Rattlers (29-7) went 4-1 on the road, splitting at Texas Woman’s and sweeping a three-game Heartland series at Oklahoma Panhandle.

No. 22 West Chester jumps into the top-25 for the first time this season and is joined by No. 23 UAH and No. 25 Caldwell making their return to the rankings.