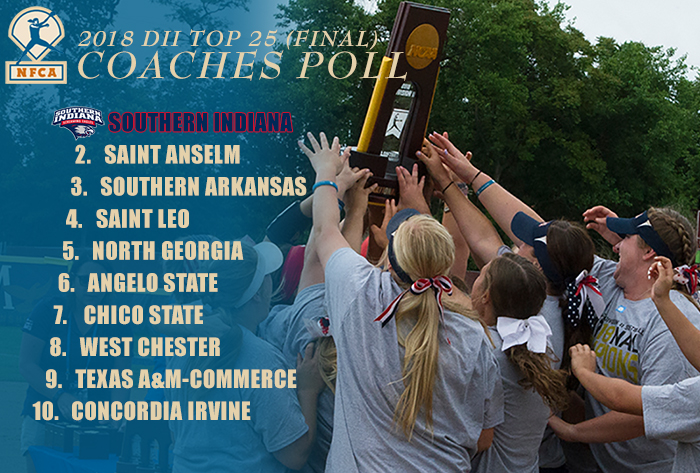 Behind a miraculous run through postseason, USI became the first women's program at the school to win a team national title. The Screaming Eagles, under the direction of Sue Kunkle, went 5-0 as the eight-seed at the NCAA Championships, sweeping second-seeded Saint Anselm in the Championship Series. Including a 4-0 sweep through the Great Lakes Valley Tournament, Southern Indiana went 14-1 after the regular season concluded. The sweep gave the Screaming Eagles their first GLVC tournament title.

National runner-up Saint Anselm received all 16 second-place votes. The Hawks (44-13-1) reached the Championship series in their first-ever National Championships appearance. Saint Anselm smashed its single-season win record by 10 as head coach Jill Gagnon was named NE-10 Coach of the Year. The Hawks won their first seven games of the NCAA postseason and finished 8-3 overall. Six of those wins were by one or two runs.

Six programs enter the poll this week, including Southern Indiana, Saint Anselm and West Chester. Joining that trio is Super Regional participants – No. 14 Young Harris, No. 23 LIU Post and No. 24 Gannon, all who earn a ranking for the first time in 2018.

The 2018 NFCA Division II Top 25 Coaches Poll is voted on by 16 NCAA Division II head coaches with two representing each of the eight NCAA regions.

The 2018 NFCA Division II Top 25 Coaches Poll is voted on by 16 NCAA Division II head coaches with two representing each of the eight NCAA regions.