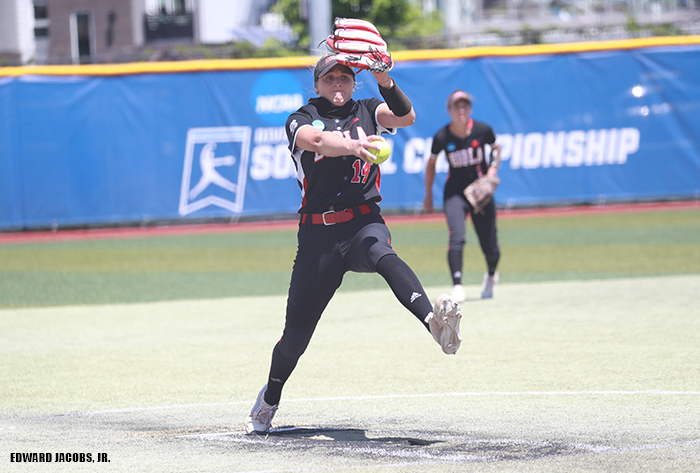 No. 1 Augustana, No. 2 Saint Anselm, No. 5 Biola and No. 6 West Texas A&M came out on top on day one of the 2021 NCAA DII Championship at the Assembly Athletic Complex on the campus of Metropolitan State University of Denver.

The Vikings defeated Valdosta State, 10-1 and will take on the Eagles, who in their NCAA Championship debut topped North Georgia, 4-0. The second-seeded Hawks won 3-2 in walk-off fashion against West Chester and will face off against the Lady Buffs, who edged No. 3 Grand Valley State, 1-0. Games five and six are scheduled for May 28 at 1 p.m. and 3:30 p.m. ET

In the elimination bracket, the Blazers and NightHawks play at 6 p.m. ET, followed by the Rams and Lakers at 8:30 p.m. ET.

The Vikings (48-6) recorded 10 hits and took advantage of four Blazer miscues in the victory. Mickschl (27-3) finished the game with two strikeouts, no walks and only one more base runner reaching via a Augustana error.

After the Blazers grabbed the early lead, the Vikings responded with three runs in the bottom half of the first. A pair of errors and two-run single by Abby Lien put Augustana up 3-1. Augie would go on to score a run in the third and two in the fourth, fifth and sixth innings. The final two runs came on Cornick's second two-run homer to close out game in the sixth.

Lien, Cornick and Mary Pardo contributed with two hits apiece for the Vikings.

Paige Austin twirled a one-hit shutout and No. 5 Biola scored four runs in the fifth, topping No. 4 North Georgia, 4-0, in the Eagles’ NCAA Championship debut.

Austin (13-6), perfect through the first three innings, allowed her only hit of the game, a leadoff fourth-inning single and finished with five strikeouts. Only one base runner reached second for the NightHawks (41-7), but a foul out and a strikeout ended the fourth-inning threat. The only other UNG baserunner was erased on an inning-ending double play on strikeout and caught stealing in the sixth.

The Biola bats were clutch in the top of the fifth, starting with pinch-hitter Brie Nowak. With two runners in scoring position, Nowak broke a scoreless deadlock with a two-run single just past the outstretched glove of the UNG third baseman. Two batters later, Kayla Neff doubled the lead for the Eagles (23-14) with another two-run single plating Nowak and her twin sister Abie.

Abbie Murrell’s walk-off single with one out in the seventh lifted Saint Anselm to a 3-2 comeback win over West Chester.

Trailing 2-1 in the sixth, Bre Klaiber launched her second solo home run of the game with two outs in the bottom of the frame to even the score. In the seventh, Kylie Fitzpatrick reached on an error and quickly moved to third on a sacrifice and wild pitch. Murrell dropped the game-winner just inside the rightfield line to plate Fitzpatrick.

Morgan Perry (20-1) picked up the win in the circle, allowing two runs on five hits with five strikeouts and walk. Klaiber was 2-for-2 with two long balls, two RBI, two runs scored and drew a walk.

Klaiber opening the scoring with a two-out homer in the bottom of the first. The Rams evened things up on an RBI double from Jaime Klemas in the fourth. One inning later, they would take the lead on a sacrifice fly to centerfield off the bat of Bri Garber.

Lair (21-5) stymied the Lakers (44-9), limiting them to three hits, striking out three and walking two in her fourth shutout of the season.

The Lady Buffs (39-11) broke through for the game’s only run with a two-out rally in the top of the third. Hailey Neira beat out an infield single to second and Shanna McBroom was hit by a pitch. Ruby Salzman roped a shot to third which ricocheted into left field, plating Neira with the eventual game-winner.

Hannah Beatus (24-3) was equally as strong in the circle for Grand Valley State. The sophomore hurler surrendered just three hits, fanned six and walked one in the defeat. Lydia Goble finished two-for-three at the plate.