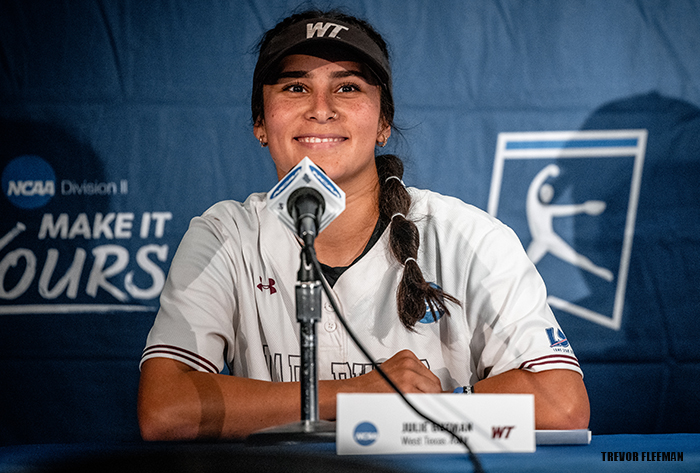 Behind a second-straight Paige Austin shutout, fifth-seeded Biola knocked off No. 1 Augustana, 3-0 to advance in the winner’s bracket. No. 6 West Texas A&M was powered by a seven-run third to defeat No. 2 Saint Anselm, 9-3. The Eagles (24-14) and Lady Buffs (40-11) are both 2-0 and one win away from the Championship Series. They will await their opponents coming out of the elimination bracket.

In the elimination bracket, No. 4 North Georgia rallied for an 8-4 win over No. 8 Valdosta State, while No. 3 Grand Valley State scored six in the top of the seventh to defeat No. 7 West Chester, 6-1.

The South Region and Atlantic Region champions finished their outstanding seasons at 38-11 and 34-16, respectively.

Paige Austin was firing on all cylinders for a second straight game, holding a high-powered Augustana lineup to just four hits in a 3-0 win for Biola. Austin tossed her second straight complete-game shutout, striking out two and walking two.

Kayla Neff’s leadoff homer in the fourth put the Eagles on the board. They would add a pair of insurance runs in the top of the seventh on a successful squeeze and some ill-advised Augustana throws.

Amanda Dickmeyer registered two base knocks for the Vikings. Ashley Mickschl suffered the defeat, allowing a run on four hits with six strikeouts and a walk in 5.1 innings of work.

After Saint Anselm opened the scoring with two runs in the first, the Lady Buffs took control of the game in the third with seven runs on six hits. With the bases loaded, Ruby Salzman dumped the ball into centerfield for an RBI single before a sacrifice fly by Erica Vessels evened the score at two. Following a pair of run-scoring singles, Julie Guzman (pictured) broke the game open with a bases-clearing three-run double for a 7-2 lead.

WT added to its lead on a two-run double in the sixth by Salzman. Kat Stackrow homered to leftcenter for the Hawks in the bottom half of the sixth to make the final margin 9-3. Stackrow finished the contest 2-for-3 with two RBI.

In the first elimination game, North Georgia rallied from an early 3-0 deficit to top Valdosta State, 8-4. The NightHawks scored eight runs over the final three innings to stay alive.

A two-run homer by Kylie Robb in the bottom of the first and a solo shot off the bat of Logan Hill, put the Blazers up 3-0 after four innings.

UNG chipped at the lead in the fifth, getting two runs back on a two-run long ball by Madison Simmons. The NightHawks grabbed the lead an inning later. After an error with the bases loaded knotted the score at 3-3, Kaylyn Anthony’s two-run single put North Georgia up 5-3. They added three more in the seventh on a miscue and another two-run single this time off the bat of Shelby Hammontree.

Aniston Gano capped off the scoring with a solo homer in the bottom of the seventh, which pushed VSU’s nation-leading home run total to 109.

Tybee Denton (4-3) earned win in three innings of solid relief. She allowed a run on two hits and walked one batter.

Trailing 1-0 for the entire game, Grand Valley State put together a six-run seventh to defeat West Chester 6-1 and stay alive at the NCAA Championship.

The Rams grabbed the early lead on a Laker miscue in the bottom of the first. However, they were unable to produce a timely hit the rest of the way, leaving 10 runners on base. Annamarie Hartman finished 2-for-4 and Emily Kim was 2-for-3 for West Chester.