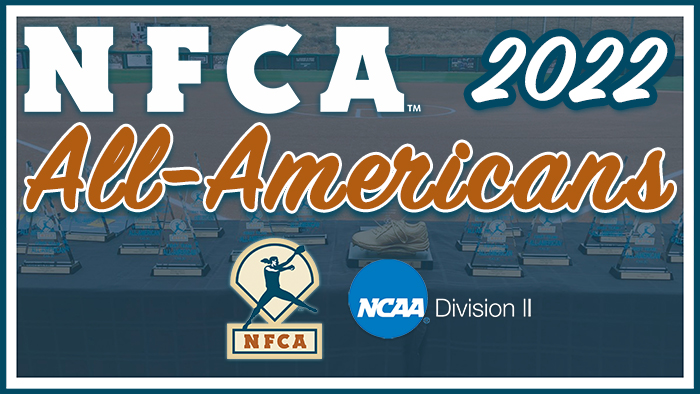 LOUISVILLE, Ky. – Fifty-four student-athletes from 43 different institutions have been voted to one of three 2022 NFCA Division II All-America teams, the Association announced on Wednesday afternoon.

Augustana, a Central Region finalist, captured four All-America honors, two on the first team. UT Tyler was one of eight programs with two honorees and joined the Vikings as the only programs with multiple first teamers.

Along with Mickschl and Perez, there are 14 returning All-Americans across the three teams, including three-time honoree Teala Howard of West Florida, a third-team selection at third base.

Along with her fourth All-America nod, Perez is taking home her third Diamond Sports/NFCA Catcher of the Year award, earning two of those at Division III (2018, 2019). She is the fifth three-time honoree – Chelsea Bramlett (DI - Mississippi State), Jaci Smith (NAIA – Oklahoma City University), Stacey Nuveman Deniz (DI – UCLA) and Kristen Rivera (DI - Washington) - amongst four-year colleges dating back to the inception of the award in 1997.

Leading UT Tyler to national championship appearance in their first official season of Division II eligibility, Perez, a Top 25 finalist for Schutt Sports/NFCA Player of the Year, is the Patriots’ offensive catalyst with a .444 batting average, 18 doubles, 10 home runs, .728 slugging percentage and 75 hits.

Madison Melvin, a second-team All-America outfielder from West Chester University, is the New Balance/NFCA Golden Shoe Award winner. She leads NCAA Division II with 56 stolen bases in 60 attempts and is the only student-athlete averaging over one steal per game. Melvin becomes the first student-athlete to represent West Chester and the Pennsylvania State Athletic Conference with this honor. Additionally, Melvin topped the Golden Rams with a .453 batting average, 77 hits, 60 runs scored and a .486 on-base percentage.

The NFCA All-America teams are voted on by the Association’s All-America Committees. In Division II, the committee is comprised of one member head coach from each of the NCAA’s eight regions. All student-athletes who were nominated  by a member head coach and voted to the first- and second-team All-Region teams were eligible for All-America consideration.