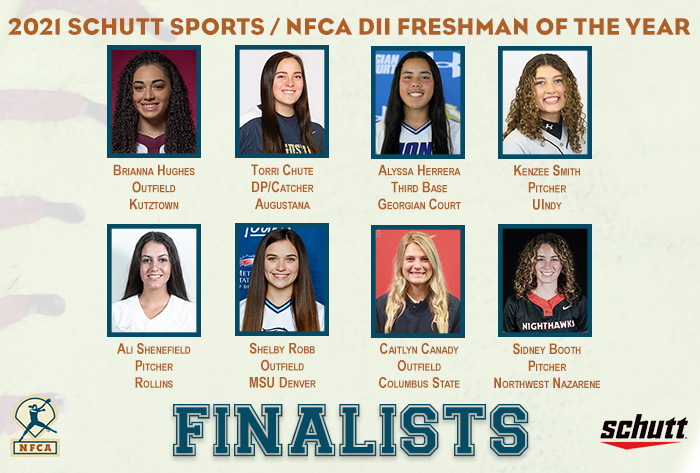 LOUISVILLE, Ky. – Eight finalists, one from each of the NCAA’s eight regions, have been selected by the Association’s Division II All-America Committee for the 2021 Schutt Sports / NFCA Division II National Freshman of the Year award.

Created in 2015, the award honors the outstanding athletic achievement among freshman softball student-athletes throughout NCAA Division II. To be eligible, student-athletes must come from a NFCA member institution. With the cancellation of last year’s season due to COVID-19, eligible candidates may hail from the 2020 and 2021 freshman classes.

Seven of the eight finalists were voted NFCA First-Team All-Region and five honorees captured their league’s freshman-of-the-year accolade. A sixth, NNU’s Booth, was named the Great Northwest Athletic Conference’s Pitcher of the Year.

Six of the eight are representing their institutions for the first time, with Booth also the GNAC’s first. Chute is the second Viking (Ashley Mickschl – 2018) and Canady is the second Cougar (Hannah Rose Corbin – 2019) to make the top eight.