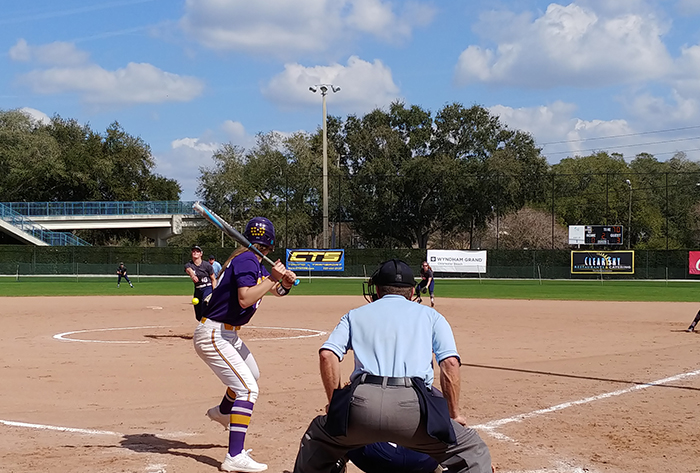 CLEARWATER, Fla. –The sun shined and the warmth was welcomed as 20 teams from 10 different states competed on the first day of the 2019 NFCA Division II Leadoff Classic at the Eddie C. Moore Complex.

Under near perfect conditions five programs – No. 22 Valdosta State, Hillsdale, Tampa, Florida Tech, and Eckerd – picked up two wins apiece. The Blazers and Chargers each knocked off a pair of nationally-ranked opponents, while the Spartans recorded a pair of 6-0 shutouts.

Valdosta State, who also did not allow a run on Friday, started off with a bang scoring a day-one best 11 runs in a 11-0 triumph over No. 18 Palm Beach Atlantic in five innings. The Blazers improved to 6-0 on the season, downing No. 2 Southern Arkansas, 3-0. Hurlers Caylie Van Auken and Kasie Johnson each allowed four hits and combined to strike out 22 and issue no walks.

Tampa’s duo of returning NFCA All-American Makaleigh Dooley and Corynn Miner tossed two and three-hit shutouts, fanning 12 and seven batters, respectively. Tampa pitchers have not allowed a run in their first 28 innings of the season.

Eckerd scored five runs in each outing to top California (Pa.), 5-0 and Wayne State University, 5-1. Triton hurler Nikole Van Gennep fanned a career-high batters in the opener and also helped herself out with a three-run homer in the fourth. Hannah Perkins allowed a run on five hits over five innings to earn the game-two win. Van Gennep capped off the game with two shutout innings.

Day two gets started at 10 a.m. and will feature all 20 teams playing two contests apiece.