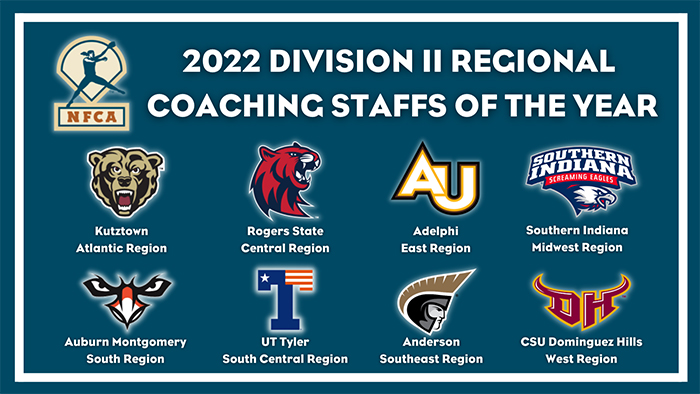 LOUISVILLE, Ky. – Eight NCAA Division II programs were selected by their peers as the 2022 NFCA Regional Coaching Staffs of the Year, the Association announced on Friday.

Regional (respective region only) and National Coaching Staffs of the Year are voted on by member head coaches.

Steered Kutztown to a 40-15 overall record and the No. 1 seed in the Atlantic Region … Ranked 20th in final NFCA DII Coaches poll in the regular season … Swept through the Atlantic 1 Regional with a win over Fairmont State and two against West Virginia Wesleyan … Fell in the Super Regionals to Seton Hill … 40 wins (40-15) is the most victories since 2012 … Lawes was named Pennsylvania State Athletic Conference East Division Coach of the Year … Perfect run through PSAC Tournament earned the Golden Bears their first tourney title since 2013.

Headed to the NCAA Division II National Championship for the first time in program history … Won the program’s first Mid-America Intercollegiate Athletic Association (MIAA) tournament with a perfect 4-0 mark … Earned the Central Region’s No. 1 seed …  Won a pair of elimination games, before topping Minnesota State in the winner-take-all regional final… Swept Central Oklahoma in the Central Super Regional … Ranked as high as No. 2 in NFCA DII Coaches Poll … Shattered single-season win record (42 in 2008) as the Hillcats enter the National Championship with a 53-10 mark.

Captured the East Region’s top seed as well as the Northeast-10 Conference’s regular season and tournament titles … Posted a 47-13 overall mark heading into the National Championship as the No. 2 overall seed … Won 15 of their last 18 games … Won the East 1 Regional after dropping the first game and winning four elimination games … Rallied in Super Regionals after falling in game one to Wilmington … 47 wins is a program record.

Great Lakes Valley Conference (GLVC) regular season and tournament champions … Making the program’s third national championship appearance … Earned the No. 5 overall seed at the NCAA Championship after being the Midwest’s No. 1 seed and region champion … Entered national championship with a  49-11 overall record, which is the second most victories amongst tournament participants … Battled through Midwest 1 Regional winning four elimination contests after being defeated in game one … Dropped just two games in GLVC play, finished with a 26-2 mark … Kunkle named GLVC Coach of the Year.

AUM’s staff is capturing the award for the second straight season after earning the program’s first trip to the NCAA Division II Championship … The Warhawks won the Gulf South regular season and tournament titles for the second-straight season … Earned the No. 1 seed in the South Region and after a South Region championship, heads into the NCAA Championship as the No. 3 overall seed … Headed into the national championship, the Warhawks posted a 48-11 overall record and 25-5 in Gulf South action … Newell earned his first Gulf South Coach of the Year honor.

Second consecutive year earning this honor … The Patriots were ranked No. 1 in the NFCA DII Top 25 Coaches Poll for all but one week this season and earned the No. 1 overall seed in the South Central Region and the NCAA National Championship … Won the Lone Star Conference (LSC) regular-season title for the second consecutive season and first South Central Region title … Headed to their first-ever NCAA DII National Championship Tournament … UT Tyler posted a 47-7 record and 26-4 in LSC play … Reed repeated as LSC Coach of the Year.

The Trojans captured the No. 1 seed in Southeast Region and reached regional final … Posted a 40-10 overall record and 20-4 in the South Atlantic Conference… Hewitt was tabbed the SAC Coach of the Year as he steered the Trojans to a SAC regular-season title … Hewitt picked up his 500th career victory on April 2 against Newberry … Anderson led the SAC in slugging (.556) and home runs per game (1.3).

Making their first ever appearance as the No. 8 seed at the DII National Championship … As the West Region’s No. 6 seed, their first bid since 2013, the Toros went 3-1 in the West 2 Regional, knocking off No. 3 Chico State and the host and No. 2 seed Concordia Irvine twice … Won games one and three at No. 1 West seed Cal State San Marcos to capture the West Region title … It marks coach Maier’s first NCAA Regional title in his 30-plus year coaching career … First 40-win season since 2012 (41-12 record entering NCAA Championship).