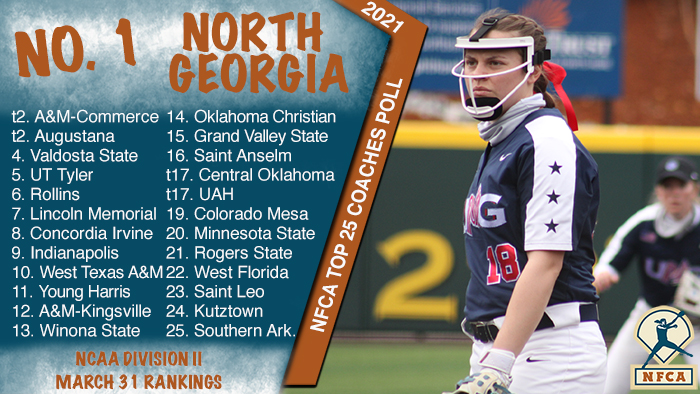 LOUISVILLE, Ky. – North Georgia remained undefeated as it tightened its grip on the No. 1 ranking in this week’s NFCA DII Top 25 Coaches Poll. The NightHawks (14-0), who returned to play on March 22, gathered 14 first-place votes and 397 points.

UNG’s pitchers showed no signs of rust following a three-plus week layoff, twirling a pair of shutouts, including a one-hitter from Kylee Smith, against Peach Belt Conference foe Flagler. The NightHawks’ bats found their form in game two with an 11-hit output.

Augustana, following two more wins last week, moved into a tie for second with Texas A&M University-Commerce. Both squads received one first-place vote. The Vikings (10-2) swept Missouri Southern, while the Lions (21-6) had their 16-game win streak snapped during a 3-2 week, which featured one win each over then-No. 9 Southern Arkansas, Lubbock Christian and then-No. 24 Angelo State.

Valdosta State and UT Tyler elevated into the No. 4 and 5 spots, respectively. The Blazers (19-3) took all three contests from then-No. 17 West Florida in a Gulf South Conference top-20 showdown. The Patriots (21-5) posted a 3-1 weekend in Lone Star Conference (LSC) play with a sweep of Angelo State and split with Lubbock Christian.

No. 6 Rollins (idle) and No. 7 Lincoln Memorial dropped, while Concordia Irvine stood pat at No. 8. The Railsplitters swept a South Atlantic Conference (SAC) twinbill from Carson-Newman, before having their 12-game win streak halted with two losses at Coker in SAC play. The Eagles improved to 11-4 with two victories over Redlands.

No. 9 Indianapolis and No. 10 West Texas A&M round out the top 10. The Greyhounds (17-2) jumped into the ninth spot with six triumphs last week as they extended their win streak to 10 games. The Lady Buffs (21-7) did not move after a 3-1 week in LSC play against St. Edwards and St. Mary’s.

No. 21 Shepherd and No. 24 Angelo State dropped out of the poll. It marked the first time the Rambelles have not been in the Top 25 since the 2020 preseason poll.

The 2021 NFCA Division II Top 25 Poll is voted on by 16 NCAA Division II head coaches with two representing each of the eight NCAA regions. Records reflect games played through March 28. In 2021, universities that are not competing will not be eligible for the poll.