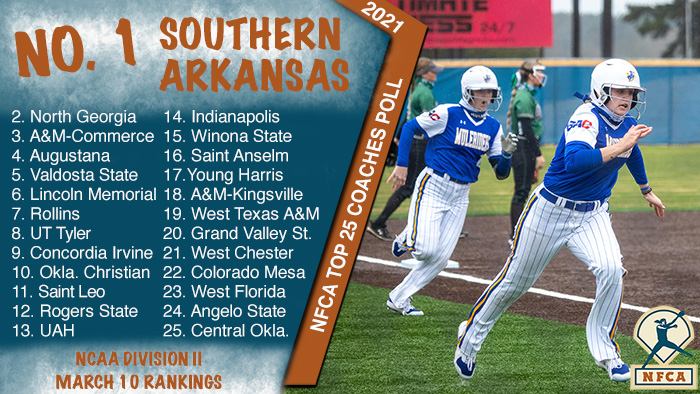 LOUISVILLE, Ky. – In this week’s 2021 NFCA Division II Top 25 Coaches Poll, there was plenty of movement and three programs made their 2021 debuts. Southern Arkansas (2-0), which is scheduled to return to play this afternoon after a five-and-a-half-week layoff, remains No. 1 with 13 first-place votes and 395 points.

Joining the top 25 are No. 22 Colorado Mesa, No. 23 West Florida and No. 25 Central Oklahoma. The Mavericks are off to an 8-0 start, following back-to-back Rocky Mountain Athletic Conference series sweeps of then-RV Metro State and Colorado Mines. The Argonauts (12-5) swept a three-game Gulf South Conference (GSC) series from Mississippi College and have won seven-of-their last eight. The Bronchos (7-3) were idle last week.

Outside of No. 1 Southern Arkansas, No. 2 North Georgia and No. 12 Rogers State, there was shifting amongst the rest of the ranked programs. No. 3 Texas A&M-Commerce, No. 5 Valdosta State, No. 6 Lincoln Memorial and No. 8 UT-Tyler moved their way up the top 10, while Oklahoma Christian returned at No. 10.

The Lions (10-4) swept three doubleheaders last week, including top-25 matchups with then-No. 16 Rogers State (played March 1 prior to poll) and then-No. 17 West Texas A&M. The Blazers (10-2) took two-of-three on the road from Montevallo in a GSC matchup. The defeat in the final game of the series, snapped VSU’s 10-game win streak.

The 2021 NFCA Division II Top 25 Poll is voted on by 16 NCAA Division II head coaches with two representing each of the eight NCAA regions. Records reflect games played through March 7. In 2021, universities that are not competing will not be eligible for the poll.