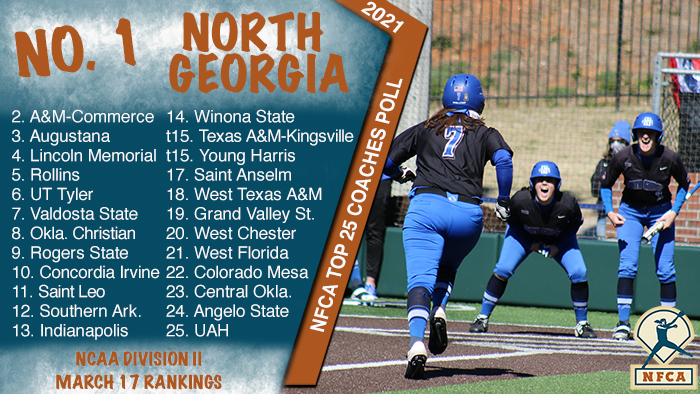 UNG opened its campaign with 12 straight wins before a pause to its season happened on March 5. The NightHawks’ scheduled return to play today against Union was postponed due to weather. UNG’s next contest will be its Peach Belt Conference opener against Flagler on March 22.

No. 2 Texas A&M University-Commerce (four first-place votes) and idle No. 3 Augustana each moved up one spot, while No. 4 Lincoln Memorial, No. 5 Rollins, No. 6 UT Tyler and No. 8 Oklahoma Christian elevated two positions each.

UT Tyler defeated Permian Basin in a doubleheader on March 12, but its March 14 twinbill at Western New Mexico was moved to March 15. The Patriots (12-4 – as of 3/14) did win both contests against the Mustangs.

Valdosta State slipped to No. 7 after going 2-1 at home against Union in a Gulf South Conference series, while Concordia Irvine fell one spot to No. 10 following a split with Biola in a four-game PacWest series.

Rogers State makes its first appearance in the top 10, rising three spots to No. 9. The Hillcats (9-3) posted a 3-1 week in MIAA action, sweeping Newman and splitting with then-No. 25 Central Oklahoma.

Rogers State faces off against No. 3 Augustana in a top-10 matchup at the HiVee Classic in St. Joseph, Mo. Additionally at the HiVee, No. 23 Central Oklahoma locks horns with No. 14 Winona State.

Southern Arkansas, who held onto the top spot since the start of the season, plummeted to No. 12. Coming off a five-and-a-half week hiatus, the Muleriders (5-2) turned in a 3-2 week in Great American Conference play. SAU split at Arkansas-Monticello and took two-of-three from Ouachita Baptist.

The 2021 NFCA Division II Top 25 Poll is voted on by 16 NCAA Division II head coaches with two representing each of the eight NCAA regions. Records reflect games played through March 14. In 2021, universities that are not competing will not be eligible for the poll.